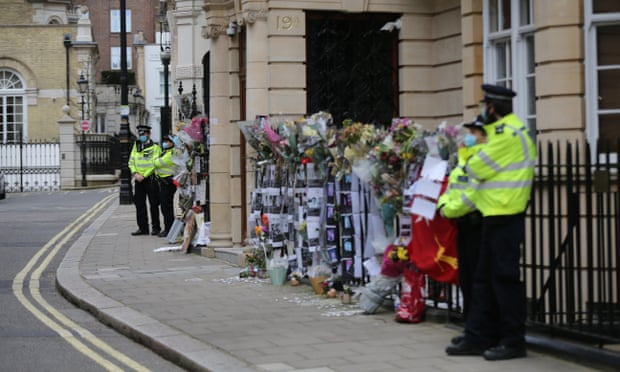 Myanmar’s ambassador to the UK, who has been locked out of his embassy by representatives of his country’s military, has urged the British government not to recognise the junta’s envoy and to send the replacement and his allies back to Myanmar.

In a move that could have long-term diplomatic implications for UK-Myanmar relations, the ambassador said he was locked out of the embassy in London on Wednesday by his deputy at the behest of the Myanmar military, which seized power in February.

“The ambassador has been recalled by the Myanmar military regime – since then he has stopped following instructions from the Myanmar foreign ministry,” said a spokesperson for Ambassador Kyaw Zwar Minn. “We believe the UK government would not back those who are working for the military junta and we also would like to urge the UK government to send them back.”

A letter to the Foreign Office from those in control of the Myanmar embassy said the deputy ambassador, Chit Win, had taken over as chargé d’affaires as of 7 April. Kyaw Zwar Minn had been formally recalled on 9 March, the letter said.

The Foreign Office is placed in a dilemma since it is not supposed to choose the identity of foreign ambassadors, and had been formally pressing Myanmar to clarify its diplomatic representation in meetings on Wednesday night. The foreign secretary, Dominic Raab, in a tweet urged the Myanmar regime to end its bullying, and paid tribute to the courage of Kyaw Zwar Minn.

Raab, currently in south-east Asia, said: “The UK continues to call for an end to the coup and the appalling violence, and a swift restoration of democracy.” He did not say which ambassador he would recognise in the future.

Kyaw Zwar Minn said through his spokesperson he had “full faith that the UK government will continue to demonstrate their rejection of the unlawful military regime”.

“He is trying to walk in the middle ground but there is no doubt which is the right side: the military council has killed nearly 600 people including 48 children,” the spokesperson said. “We call on the UK government specifically to refuse to work with the chargé d’affaires, Chit Win, that the military council have nominated or any other ambassador that they might try to nominate in future.”

He continued: “There has been a coup in Myanmar in February and now the same situation in central London. This is unacceptable and disrespectful not only to the people of Myanmar but it is also clearly disrespectful to all of democratic society in the UK.”