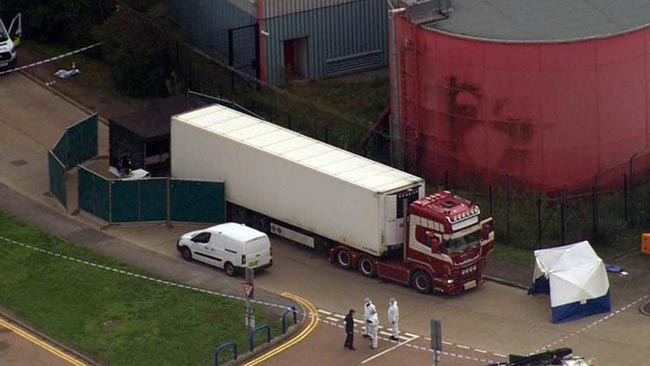 British police launched a murder investigation on Wednesday after 39 bodies were found inside a shipping container on an industrial estate in southeast England.

Essex Police said that a 25-year-old man from Northern Ireland had been arrested on suspicion of murder. The bodies were found at Waterglade Industrial Park in the Essex town of Grays, a town about 25 miles east of central London

Police said that they received a call around 1:40 a.m. on Wednesday morning from the ambulance services. They said that 39 people were pronounced dead at the scene. The police said that “early indications” suggest that one is thought to be a teenager.

The police believe the container was from Bulgaria and entered the country at Holyhead in North Wales.

“We have arrested the lorry driver in connection with the incident who remains in police custody as our enquiries continue,” Chief Superintendent Andrew Mariner said in the statement. “This is a tragic incident where a large number of people have lost their lives. Our enquiries are ongoing to establish what has happened.

He added that the process of identifying the victims could take a long time.

Priti Patel, Britain’s home secretary, tweeted: “Shocked & saddened by this utterly tragic incident in Grays. Essex Police has arrested an individual and we must give them the space to conduct their investigations.”

Even though Essex police said the container was from Bulgaria, they did not specifically identify the victims as migrants on Wednesday morning.

Most fatal incidents in which victims died inside shipping containers in recent years have involved migrants, however. In August 2015, 71 bodies were found on the A4 Highway in Austria, inside a hermetically sealed and locked freezer truck. Most victims were from Syria, Iran, Iraq and Afghanistan.

The discovery came at the peak of Europe’s refugee influx and became one of its defining, tragic moments.

Research by German public television and the Sueddeutsche Zeitung newspaper later revealed that Hungarian officials had tapped the traffickers’ phones, but failed to intervene on time.

Four human traffickers were jailed for life over their involvement in the 2015 incident this summer.