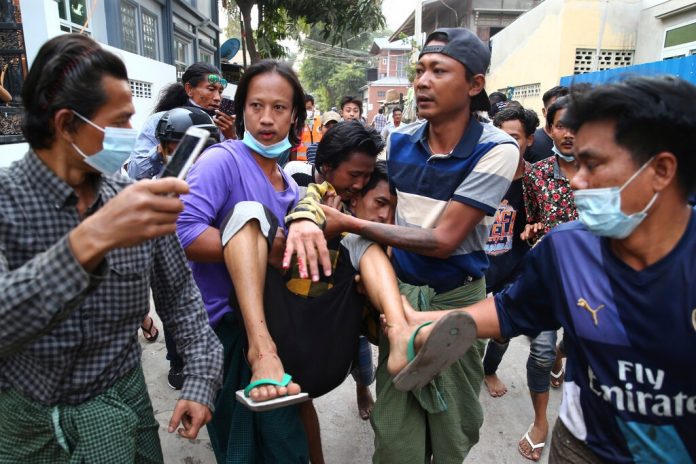 Security forces in Myanmar opened fire on protesters in the city of Mandalay on Saturday, killing two people and wounding dozens, according to witnesses.

The shootings occurred as the authorities were trying to force workers back to their jobs at a local shipyard. They were among hundreds of thousands of workers across Myanmar who have walked off their jobs to protest the military’s Feb. 1 coup and its ouster of elected civilian leaders.

More than 1,000 demonstrators gathered at the shipyard to block the police, leading to a tense standoff that lasted much of Saturday afternoon. The authorities used water cannons, rubber bullets, tear gas, slingshots and ultimately live ammunition to break up the crowd, witnesses said.

At least 40 people were wounded, according to volunteer medics at the scene.

The shootings came one day after the death of another protester, a 20-year-old woman whom the police shot in the head at a demonstration in the capital, Naypyidaw, on Feb. 9. The woman, who was on life support before succumbing to her injury, is believed to have been the first person killed in the protests against the coup.

A volunteer with a local medical charity, Ko Kyaw Lin, said he had been helping rescue wounded protesters in Mandalay but could not get close enough to some of them because security forces were shooting at people in the crowd.

“When we picked up the patients on the street, they had been shot by a sniper,” he said. “They shot everyone no matter who they were.”

A video taken at the scene showed one man lying in a pool of blood, apparently dead from a gunshot wound to the head.

The Myanmar military, or Tatmadaw, which has ruled the country for much of the past 60 years, staged a pre-dawn coup on Feb. 1, forcing out elected leaders and placing the head of the civilian government, Daw Aung San Suu Kyi, under house arrest. 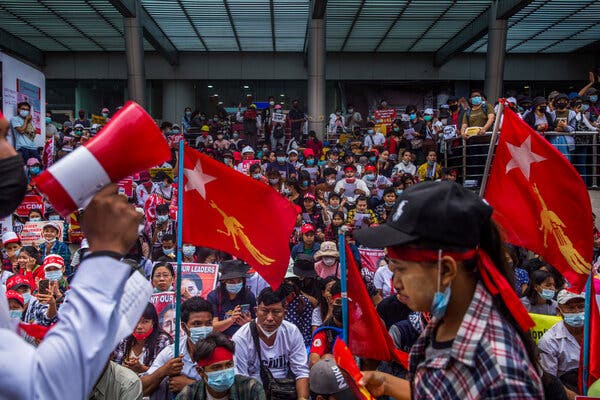 Protesters gathered in Yangon on Friday

The military also detained many leaders of her party, the National League for Democracy, including state chief executives and newly elected members of Parliament who were about to be sworn in. More than 500 political figures and critics of the military are now being held, many without charges.

The coup immediately prompted protests throughout the country and spurred a growing civil disobedience movement with widespread labor walkouts. Among the key targets of the work stoppages are key entities that help the military collect revenue, including tax offices, the government electricity ministry and private banks.

Saturday was the bloodiest day of protests so far. The clash began when the police tried to force several workers to sail a ship from Mandalay, Myanmar’s second largest city, about 200 miles up the Irrawaddy River, to the city of Bhamo.

The men refused and a crowd of supporters gathered in the neighborhood of dirt roads and food stalls near the small Yatanarpon shipyard. Men rolled barrels into the street to build a barricade to hold back the police.

Videos from the scene showed the police chasing protesters, striking some with their batons, and arresting those they could catch. At the sound of gunshots, some of the men ducked and took cover.

Some police officers used slingshots to shoot rocks and other projectiles at the protesters. They also scattered spiky clusters of scews on the street to cut the feet of the sandal-wearing protesters as they ran. 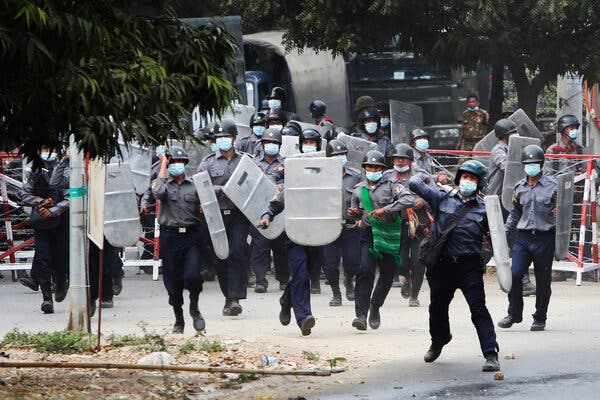 As the afternoon wore on, the police became more aggressive and began firing live bullets into the crowd. One video showed a group of police officers moving toward the protesters and firing their weapons as they walked. It was unclear whether they were firing rubber bullets or live ammunition.

Most, if not all, of the injured were shot. Volunteer medics took many of them to a nearby monastery for treatment, but some of the wounded were arrested.

Ko Min Kyaw, 38, a dock worker at the shipyard, joined in the demonstration and was among those wounded.

“We were protesting against the military coup, peacefully,” he said. “The police started to shoot with slingshots and then they fired real bullets at us.”

Mr. Min Kyaw said he ran but was shot in the thigh, causing a wound that needed six stitches. Even after medics took him to the monastery, he could still hear gunshots. But being wounded will not deter him from protesting against the military, he said.

“Now, we people have to protect ourselves because the police and soldiers who should protect us are attacking us aggressively,” he said. “We will fight the regime until they are eradicated from our country. We will never give up.”

In Yangon, Myanmar’s largest city, thousands of demonstrators staged numerous peaceful protests against the coup at various locations, a tactic that could reduce the risk of a violent police response.

The authorities had barricaded the area around Yangon’s Sule Pagoda, the site of large demonstrations earlier this month, so protesters gathered in other parts of the city. Some staged marches. Others used creative methods to block streets.

To keep the police from clearing them from intersections, some protesters pretended to faint or make like they needed to tie their shoes. Others spilled bags of onions. They then scurried to pick up the onions, placing them in bags with holes in them so that they fell onto the street again.

The student protester who died in Naypyidaw on Friday, Mya Thwate Thwate Kaing, has become a martyr of the protest movement, drawing national and international attention. Her funeral is scheduled for Sunday.

She turned 20 last week while she was lying in the hospital in a vegetative state, kept alive only by a ventilator. 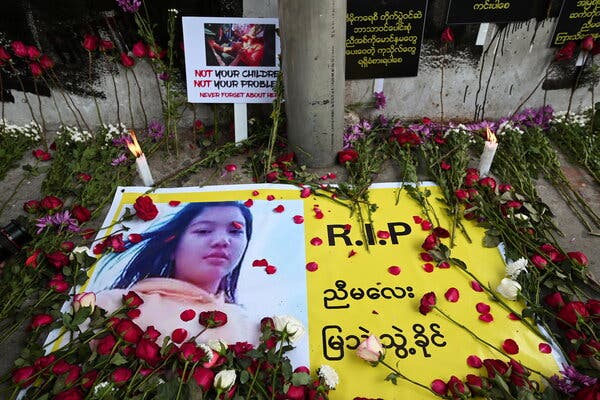 A video that captured the moment of her shooting shows her standing near a bus stop shelter — far from the police line — where she and other protesters had taken refuge. As she turned to leave, she was shot in the side of the head and dropped to the ground.

In Washington, a State Department spokesman, Ned Price, said the Biden Administration was saddened by the report of her death and offered condolences to her family.

“We condemn any violence against the people of Burma,” he said, using the former name for Myanmar, “and reiterate our calls on the Burmese military to refrain from violence against peaceful protesters.”

Ms. Mya Thwate Thwate Kaing had gone to the protest with her sister, Mya Thadoe Nwe, who said they hid by the bus stop when the police started using a water cannon. Her sister posed no threat to the police and was protesting peacefully, she said.

Despite her sister’s death, Ms. Mya Thadoe Nwe has no intention of backing down from protesting and hopes that her sister did not die in vain.