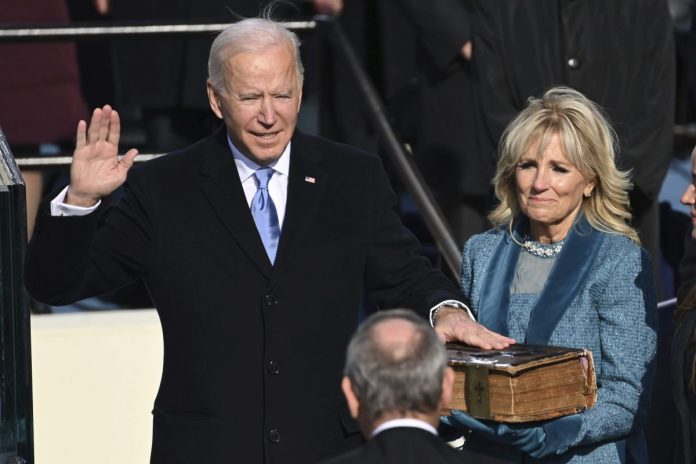 Joe Biden has been sworn in as the 46th US president, ending one of the most dramatic political transitions in American history.

“Democracy has prevailed,” he said after taking the oath of office from Chief Justice John Roberts.

Outgoing President Donald Trump, who has not formally conceded to Mr Biden, is not attending the ceremony.

Vice-President-elect Harris was sworn in ahead of Mr Biden – becoming the first woman and the first black and Asian-American person elevated to serve in a role a heartbeat from the presidency.

The inauguration is taking place at the US Capitol. There is extra-tight security after the building was stormed by violent pro-Trump protesters in a deadly riot on 6 January.

Some 25,000 National Guards are protecting the inauguration ceremony, which is missing the traditional hundreds of thousands of spectators because of the coronavirus pandemic.

Mr Trump left the White House for the last time as president shortly after 08:00 (13:00 GMT). He boarded a helicopter, flew to the nearby Andrews Air Force base, and has now arrived in Florida.

He is the first president not to attend his successor’s inauguration since 1869.

Early on Wednesday Mr Biden attended Mass at a cathedral in Washington – along with four Roman Catholic congressional leaders, both Democrats and Republicans – before making his way to the Capitol.

Age 78, Mr Biden is the oldest US president ever to be sworn in.

Among those attending the ceremony are three of his predecessors: Barack Obama – under whom Mr Biden served for eight years as vice-president – Bill Clinton and George W Bush.

Aides say Mr Biden will use his inaugural address of about half an hour to deliver an optimistic call for national unity after his Republican predecessor’s turbulent tenure.

The ceremony includes musical performances by Lady Gaga – who sang the national anthem – as well as Jennifer Lopez and Garth Brooks.

An evening concert at the Lincoln Memorial in the city will be hosted by Tom Hanks and include Bruce Springsteen, John Legend, Jon Bon Jovi, Justin Timberlake, and Demi Lovato.