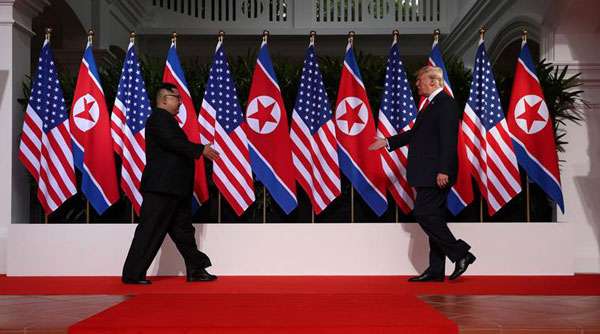 Donald Trump and Kim Jong-un have become the first sitting US president and North Korean leader to meet, an unprecedented development after a year of exchanging threats.

The pair shook hands at a luxury hotel in Singapore’s Sentosa island after months of diplomatic twists and turns.

They are now set to discuss defusing tensions and nuclear disarmament.

Analysts are split on what it will achieve. Some see it as propaganda win for Mr Kim, others a path to peace.

The two men walked towards each other and firmly gripped each other’s hands in front of US and North Korean flags.

In brief initial comments in front of the press, the US president predicted a “terrific relationship” with Mr Kim.

“I feel really great. We’re going to have a great discussion and will be tremendously successful,” the US president said.

Sitting alongside each other, the pair appeared relaxed against the odds.

“It was not easy to get here. There were obstacles but we overcame them to be here,” Mr Kim said.

The leaders will now hold a one-to-one meeting, with translators, before a working lunch.