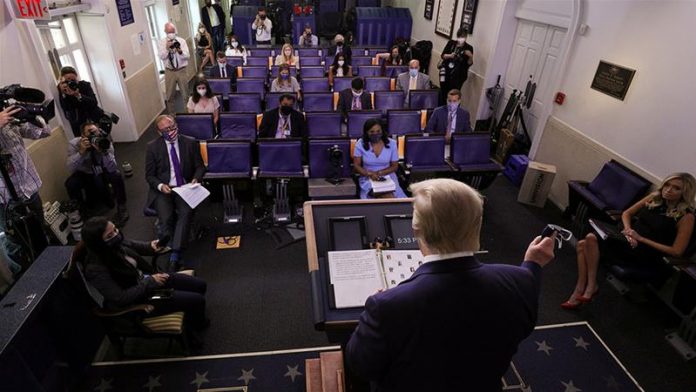 In his first coronavirus briefing in months, Trump said the pandemic will probably get worse before it gets better.

United States President Donald Trump, in a shift in rhetoric on facial coverings, encouraged Americans on Tuesday to wear a mask if they cannot maintain social distance from people around them in an effort to curb the spread of the coronavirus.

In his first briefing focused on the coronavirus pandemic in months, Trump told reporters at the White House that the virus will probably get worse before it gets better.

Trump has been reluctant to wear a mask himself in public. He wore one for the first time in public during a recent visit to a military hospital, but has otherwise avoided putting one on in front of the press.

As cases rise in states around the country, including in politically important states such as Florida, Texas and Arizona, Trump is shifting his tone to try to get the number of cases under control.

“We’re asking everybody that when you are not able to socially distance, wear a mask, get a mask. Whether you like the mask or not, they have an impact, they’ll have an effect and we need everything we can get,” he said.

Trump said he was getting used to masks and would wear one himself in groups or when on an elevator.

“I will use it, gladly,” he said. “Anything that potentially can help … is a good thing.”

The president also urged young Americans to avoid crowded bars where the virus could spread.

The comments came at the end of Trump’s evening briefing, which lasted less than half an hour. Trump appeared alone, with no public health experts joining him.

During the question-and-answer session following his prepared remarks, Trump raised eyebrows by saying he wished alleged sex trafficker Ghislaine Maxwell well, noting that he had met her multiple times in the past.

Trump was asked if he thinks Maxwell will “turn in powerful men” following her arrest, given that she was the longtime associate of Jeffrey Epstein and was his alleged co-conspirator.

Maxwell was arrested early this month in New Hampshire, where authorities said she had been hiding at a sprawling property she bought while shielding her identity. Prosecutors have accused Maxwell, 58, of helping Epstein recruit and eventually abuse girls as young as 14 from 1994 to 1997 and lying about her role in depositions in 2016, charges she has strenuously denied.