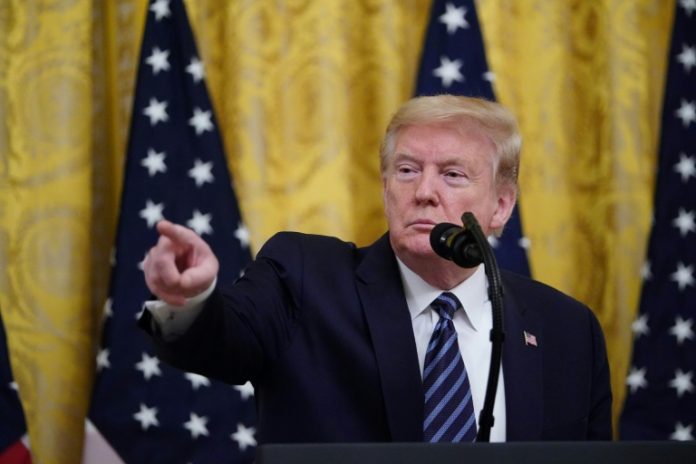 US President Donald Trump on Thursday threatened China with fresh tariffs as he stepped up his attacks on Beijing over the coronavirus crisis, saying he had seen evidence linking a Wuhan lab to the contagion.

The diatribe from the Republican incumbent came as data showed the United States shed more than 30 million jobs in six weeks, as lockdown measures began to bite across the nation.

The gloom in the world’s largest economy found its parallel across the Atlantic, where experts warned of an unprecedented financial catastrophe in Europe.

The outbreak of the novel coronavirus has so far killed more than 230,000 people and forced more than half of humanity to live under some kind of lockdown, which has crippled economies.

The virus is believed to have originated late last year in a market in the Chinese city of Wuhan that sold wild animals for human consumption, but speculation has swirled about a top-secret lab in the ground-zero city.

Asked if he had seen anything giving him a high degree of confidence that the Wuhan Institute of Virology was the source of the outbreak, Trump replied, “Yes, I have.”

Pressed by reporters at the White House for details on what made him so confident, Trump replied: “I cannot tell you that.”

Trump is increasingly making Beijing’s handling of the outbreak a major issue for his November re-election campaign.

When asked about reports that he could cancel US debt obligations to China, Trump said he could “do it differently” and act in “probably a little bit more of a forthright manner.”

“I could do the same thing but even for more money, just putting on tariffs,” he said.

Despite a truce in the long-running trade war between Washington and Beijing reached in January, tariffs are already in place on two-thirds of trade between the economic powers.

European and US markets finished the day in negative territory, as a spate of figures confirmed fears about how the COVID-19 crisis is pulverizing global growth.

The latest jobless claims by another 3.84 million Americans translate into a jarring conclusion — roughly nine percent of the US population has filed for unemployment benefits in six weeks.

In the midwestern US state of Michigan, protesters – some of them armed – stormed the state capitol building, demanding that the Democratic governor remove strict lockdown rules, which they say hurt the economy and represent governmental overreach.

“The euro area is facing an economic contraction of a magnitude and speed that are unprecedented in peacetime,” she warned.

ECB economists expect output in the 19-nation currency club to shrink by “five to 12 percent” this year, she added.

Eurostat figures showed the eurozone economy was estimated to have shrunk by 3.8 percent in the first quarter.

Germany, Europe’s biggest economy, “will experience the worst recession in the history of the federal republic” — founded in 1949 — Economy Minister Peter Altmaier warned, predicting it would shrink by a record 6.3 percent.

The coronavirus virus has infected at least 3.2 million people so far, with Russia’s Prime Minister Mikhail Mishustin becoming the latest high-profile figure to test positive as his country’s caseload surged past 100,000.

But there was some reason for cheer.

American scientists reported positive tests for an improved treatment, and with deaths and infections starting to drop in some hotspots, countries looked at the next phase in their plans to lift crippling lockdown measures.

A decision on when to reopen schools is to come next week.

In South Korea, where COVID-19 was detected in mid-February, no new infections were reported for the first time, suggesting its aggressive test-and-trace strategy is working.

South Korea’s death toll is around 250 – vastly lower than that of Italy, Britain, Spain and France, which have each recorded at least 24,000 fatalities.

The United States tops the table with nearly 63,000 deaths. It recorded more than 2,000 deaths for the third day running Thursday.

Italy, once the world center of the outbreak, said it was hoping to reopen two major airports next week, but – like Spain – plans a cautious reopening.

“We cannot allow the efforts made to be in vain because of rashness at this delicate stage,” Prime Minister Giuseppe Conte said.

And British Prime Minister Boris Johnson, who himself battled COVID-19, said the country was “past the peak” of its outbreak.

Meanwhile, in the first evidence of successful treatment, a US clinical trial of the drug remdesivir showed that patients recovered about 30 percent faster than those on a placebo.

“The data shows that remdesivir has a clear-cut, significant, positive effect in diminishing the time to recovery,” said Anthony Fauci, the top epidemiologist in the United States.

But it is a treatment, not the much-sought-after vaccine that might allow a full return to normal life.

More than 130 virus therapies are currently being investigated, the International Federation of Pharmaceutical Manufacturers and Associations said Thursday.

Most are still in the early stages of testing, but more than 25 clinical trials have begun, IFPMA director Thomas Cueni said.