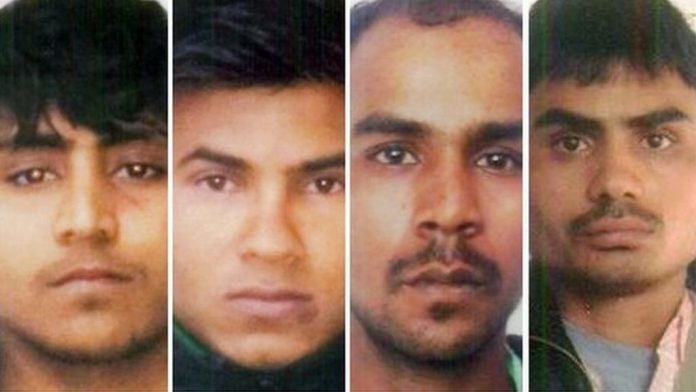 More than seven years after a 23-year-old medical student was gang-raped in a moving bus in Delhi, India, four men convicted for the brutal assault were hanged Friday morning.

The four men — Akshay Kumar Singh, Pawan Gupta, Vinay Sharma and Mukesh Singh — were hanged at 5:30 am at Delhi’s Tihar Jail, hours after the Supreme Court, in a midnight hearing, refused to grant them relief and stay their executions. The four were hanged simultaneously, a first in Tihar Jail’s history.

The four men were declared dead at around 6 am, half-an-hour after they were hanged. “[A] doctor has examined [them] and declared all four dead,” Director General of Tihar Jail Sandeep Goel said.

The four men were convicted in the 2012 Nirbhaya gang-rape and murder case, a crime that shook the country and forced the government to bring in tougher laws on crime against women. The crime took place on December 16, 2012, when a 23-year-old medical student boarded a bus in Delhi along with her male friend.

Onboard the bus, the woman and her friend were assaulted by a group of six people. The woman, who was gang-rape, died two weeks later. The brutal nature of the attack led to country-wide protests and forced the government to set up a commission to review the country’s laws on rape and crime and against women. The commission’s review ultimately led to laws prescribing stricter punishments for crimes against women.

Six people were accused of gang-raping and murdering the 23-year-old medical student, who came to be called Nirbhaya. Of the six, one was a juvenile and was convicted by the juvenile justice board. He served three years in a reformation home and was released.

Of the remaining five, one committed suicide in jail. The four others were convicted by a trial court and sentenced to die. The convictions and the death penalties handed to the four men were upheld by the Delhi High Court and the Supreme Court.

In the last 24 hours, some of the four convicts again moved various courts seeking relief from the death penalty. All the courts, which included the Patiala House Court in Delhi, the Delhi High Court and the Supreme Court, refused to intervene and stay the executions.

After the Supreme Court rejected the final plea at around 3:30 am, the four convicts were hanged at Delhi’s Tihar Jail at 5:30 am. Their bodies will now be sent for post-mortem.