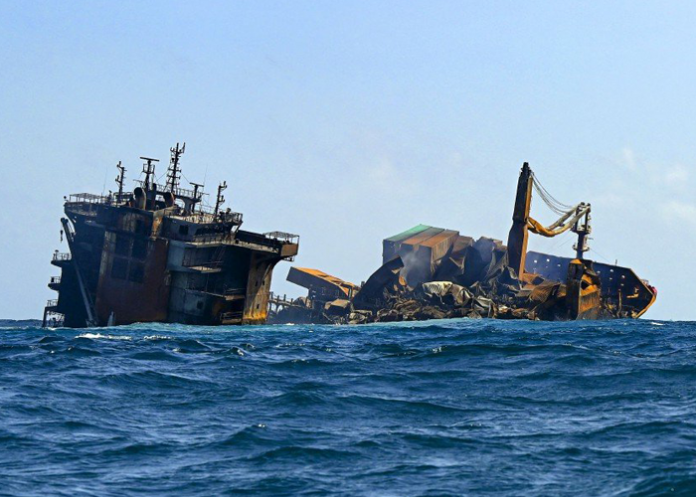 The operation to tow the damaged boxship MV X-Press Pearl vessel was halted yesterday as the stern of the ship had made contact with the sea bed, Sri Lanka Navy Spokesman Captain Indika de Silva said.

However, he said that as of yesterday evening, there was no sign of an oil leakage but the Sri Lankan and Indian Coast Guard ships with capabilities of dealing with an oil spill are on stand-by to respond in such a scenario.

The salvage team had commenced towing the ship using a tugboat from the Dutch salvage firm SMIT around 9.00 am yesterday. However, the Navy Spokesman said that the ship could not be taken too far as the stern area of the ship, which was already taking in water, had made contact with the sea bed making it impossible to move the ship.

According to the Marine Environment Protection Authority (MEPA), in the event of an oil spill, the sea areas stretching from Dikovita to Kepungoda, Negombo would be affected.

The President stated that the decision taken is based solely on technical facts and not on politics. Environment Minister Mahinda Amaraweera says that even though billions of Rupees would be paid as compensation for the X-Press Pearl fire, the environmental damage caused is irreparable.

The Minister said that the Government has paid maximum attention to the damage caused by the Pearl Express fire and a number of decisions were taken in this regard at the discussion held on Tuesday under the patronage of President Gotabaya Rajapaksa.

He was addressing a media briefing at the Ministry of Environment yesterday morning (02).

Explaining the situation, the Minister said that investigations should be carried out into the cause of the fire and those who allowed the ship to enter our country and that action should be taken to punish those persons irrespective of their rank.

“Therefore, no matter how much compensation is received for the Pearl Express which caught fire, the environmental damage caused by it cannot be compensated at all,” the Minister said.

The Government is currently focusing on preventing an oil spill if the ship sinks. He added that if an oil spill occurs and no action is taken to prevent it, this will cause massive environmental damage.