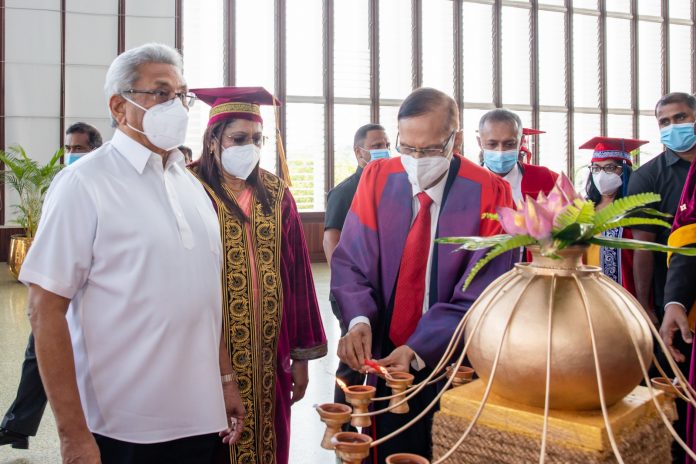 The ceremony to mark the official launch of Gampaha Wickramarachchi Ayurveda Institute as a fully-fledged university was held under the patronage of President Gotabaya Rajapaksa and Prime Minister Mahinda Rajapaksa, at the BMICH on Thursday (March 04).

Ayurveda Cakrawarti Pandith G.P. Wickramarachchi established the Gampaha Sidayurveda Vidyalaya in 1929 as a centre of learning of Sidhayurveda system of medicine. The first batch consisted of 20 students.

In 1995, it was elevated to the status of a university campus, affiliated to the University of Kelaniya.

With the mission of becoming a centre of excellence in indigenous medicine studies in South Asia, the institute was launched as the Gampaha Wickramarachchi University of Indigenous Medicine, Sri Lanka with effect from March, 01, 2021.

This will be the 16th National University of Sri Lanka, says the President’s Media Division (PMD). Its new academic structure will offer seven new academic programmes. A total of 350 students will be enrolled for the year 2021 with each batch consisting of 50 students. Entrants to the university will be selected based on the G.C.E (A/L) Examination held in 2020.

During the event, President Rajapaksa has launched the website of the university and signed the guest book.

In parallel to the official inauguration of the university, its official logo, flag and song were also launched during the event, the PMD added.

Vice Chancellor of the University Senior Professor Janitha A. Liyanage has presented mementos to the President, Prime Minister and the Minister of Education.