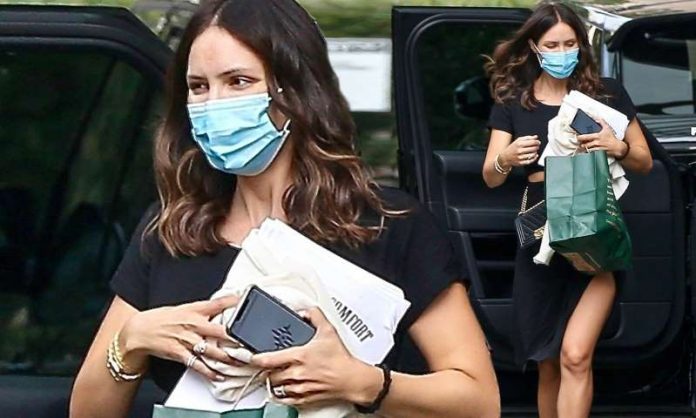 Katharine McPhee put on a leggy display as she arrived at a Los Angeles hotel on Sunday afternoon.

The 36-year-old actress and singer was spotted arriving at the hotel, though she lwasn’t with husband David Foster.

McPhee was spotted carrying one of her beloved dogs, either Larry or Wilmer, as she headed into the hotel.

The Smash star was spotted exiting her vehicle wearing a stylish black top that exposed her midriff.

She also wore a black skirt that fell to her knees with a slit up the leg, while staying safe with a blue face masks.

She completed her look with black  flat shoes, while carrying several bags, one of which held one of her dogs.

McPhee made headlines last month when sources claimed that she wants to have a child with her 70-year-old husband David Foster.

The couple, who married in June 2019, are, ‘definitely trying’ to have a baby, according to sources from US weekly.

When McPhee and Foster tied the knot last summer after dating for two years, two of Foster’s daughters said they knew they wanted to start a family.

Sara Foster and Erin Foster both told US weekly that they, ‘fully expect her to have a child and fully support it.’

McPhee played Paige Dineen in the CBS series Scorpion for four seasons, before it went off the air in 2018.

She has a film entitled The Tiger Rising in post-production, starring alongside Dennis Quaid, Sam Trammell and Queen Latifah.

The actress is also attached to star in Intensive Care with Chris Klein, Lena Olin and Ethan Peck, which is in pre-production.