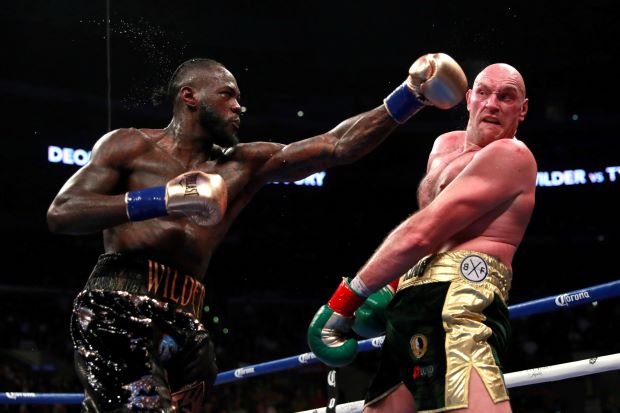 Tyson Fury has informed the World Boxing Council he plans to fight an as-yet-unnamed opponent before any rematch with reigning heavyweight champion Deontay Wilder, the WBC said Tuesday.

The WBC said on Twitter that it had been notified by Fury’s camp that the British fighter was planning another fight before climbing back into the ring with Wilder.

Wilder and Fury fought to a draw in Los Angeles in December after an epic 12-round battle at the Staples Center.

Their rematch is likely to be one of the most anticipated fights of the year following a first meeting which reignited interest in the heavyweight division.

The two fighters traded verbal barbs on social media on Tuesday after news of the delayed rematch emerged.

Wilder, who sent Fury to the canvas twice in their first fight, mocked the Briton for delaying the rematch.

“You requested a warm-up fight first – I don’t blame you tho, I probably would too if I saw my brains splashed all over the canvas,” Wilder said on Twitter.

Fury jabbed back with a dig at Wilder’s perceived low profile amongst mainstream US sports fans.

“Get your self a bit more well known in America first kid & then I’ll give you another chance!” Fury wrote.

“I already beat you & the world knows it & so do you must be hard for you that a British fighter has taken over the USA.”

Top Rank is owned by veteran promoter Bob Arum, who has a history of difficult negotations with Al Haymon, one of Wilder’s co-managers.

The WBC had earlier given the greenlight for a direct rematch between Wilder and Fury following their December 1 meeting.

“Wilder and Fury gave boxing one of the best fights in the heavyweight division in a long time, which has created tremendous popular demand for the fans to see a rematch,” the WBC said in December.

Wilder, who retained his title with a controversial split decision draw against Fury, had stated his desire to schedule a rematch as quickly as possible.

“I’m ready to do it again,” Wilder said last December. “I’m looking forward to giving him the rematch as soon as possible.”