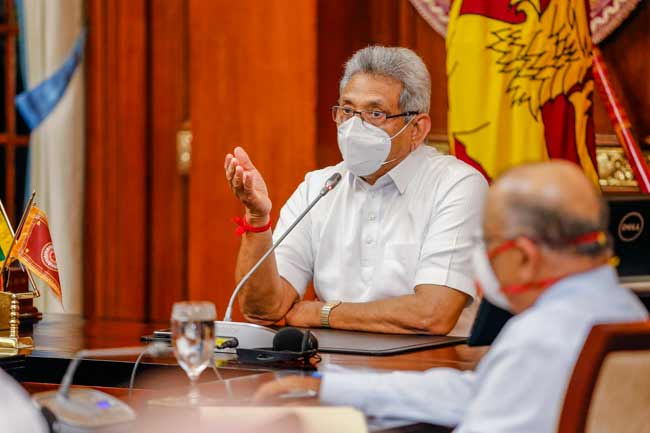 President Gotabaya Rajapaksa has handed over letters of appointment to a selected group of graduates symbolizing the recruitment of 60,000 graduates to the public service in order to create a culture of ‘Rata Wenuwen Weda’ (Work for the Country) as envisaged in the “Vistas of Prosperity and Splendour” policy statement.

The simple ceremony that lasted just for 25 minutes was held at the Presidential Secretariat yesterday (02), the President’s Media Division (PMD) said.

Even though applications were initially called to recruit 50,000 graduates, the government later decided to recruit 60,000 on the directives of the President.

The number of graduates who joined the public service yesterday stands at 50,177. Out of this, 38,760 are females. The number of employed Arts graduates is 31,172. According to the graduate classification, 29,156 internal graduates and 20,322 external graduates have been recruited. Appointments were also given to 1,000 monks, the PMD added.

Among other graduates, 1,839 are from the Commerce stream, 7,278 are from Management, 4,494 from Science, 143 from Indigenous Medicine and 161 from Allied Health Science, 989 from Computer Technology, 233 from Engineering and Law and 1,906 from Diploma in Accounting, according to the PMD.

The job recipients will be directed to a leadership, skills and attitude development training programme. At the end of the one year training period appointees will be employed in institutions directly related to the rural sector such as Rural and Estate Schools, Department of Agrarian Services, Regional Irrigation Offices, Department of Wildlife, government Ayurvedic hospitals, Rural Hospitals, Dispensary and Department of Minor Export Crops.

President has requested the appointees to actively contribute to the development process. He emphasized that newly appointed employees should do justice to the salaries they earn and avoid being a burden to those who are engaged in agriculture and fisheries sectors who earn money to pay salaries of the public sector, the PMD’s release read further.

President has highlighted that the responsibility lies with the newly recruited to enhance their knowledge in the selected field and to pursue post-graduate studies and computer training for the furtherance of their careers.