The low pressure area in the South Bay of Bengal to the South-east of Sri Lanka is likely to develop in to a depression during next 48 hours and move North-northwestwards towards Tamil-Nadu coast, stated the Meteorology Department.

Under the influence of the system, the possibility for heavy rainfall, sudden roughness associated with sudden increase of wind speed (up to 70-80 kmph) in the deep sea areas off the coast extending from Hambantota to Trincomalee via Batticaloa and Pottuvil is high.

Naval and fishing communities are requested to be attentive about advisories issued by the Department of Meteorology in this regard.

Winds speed will be 50-60 kmph over these sera areas, and the wind speed can increase up to 70-80 kmph at times. The sea areas can be rough to very rough at times while rough seas can be expected during thundershowers too.

The Meteorology Department advises fishermen not to venture into the deep sea areas off the coast extending from Hambantota to Trincomalee via Batticaloa and Pottuvil from today (11).

Meanwhile, the fishermen, who are currently in the deep Sea of South-west Bay of Bengal, are advised to move into safer sea areas. 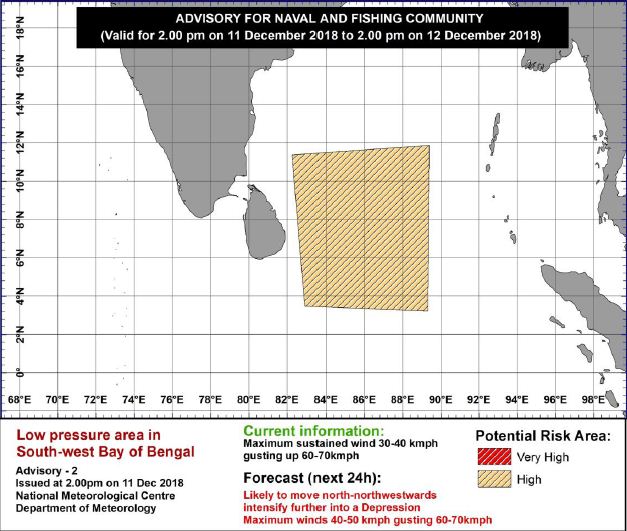