Issuing a statement, former Speaker of the Parliament has stated that all must act with patriotism and independence to safeguard the future of democracy in Sri Lanka.

He states that the willful disregard of the executive towards Parliament leaves the rights and freedoms of ordinary citizens at risk of similar abuse.

According to him, the ‘purported’ Foreign Minister suggested the dissolution of the parliament on the ‘imaginary premise’ that that he, the Speaker, intended to prevent the President’s delivery of the Statement of Government Policy when Parliament was set to reconvene on 14th November.

The actions of the Speaker and Parliament may not always be aligned with the wishes of the executive, former Speaker points out.

Jayasuriya stated that he allowed a floor vote as 124 Members of the Parliament requested him of it as it was the right of the majority.  No member made request that the Statement of Government Policy be prevented nor would he have entertained such a request, added the former Speaker.

The complete message of Karu Jayasuriya is as follows:

Under these dire circumstances, I urge all public servants who have sworn an oath to defend the Constitution to revisit that oath. Ask why we are required to pledge fealty to this document and not to any one person or a single position of power. Our foremost duty is to the Constitution. I ask all public servants across the country to remember their obligations to this supreme law of our motherland, and to safeguard the independence of the public service, police and the judiciary. I call upon all public servants to refuse to execute any illegal orders they may receive, no matter from whom.

Every citizen who is entrusted with responsibilities under the Constitution should think first of the country and not of party politics or personal affiliations. We must all act with patriotism and independence to safeguard the future of democracy in our country.

I lament that the purported Foreign Minister, a highly regarded politician, has falsely alleged that I intended to prevent the President from delivering the Statement of Government Policy when Parliament was set to reconvene on 14th November. It is on this imaginary premise that the Minister suggests that Parliament had to be dissolved. 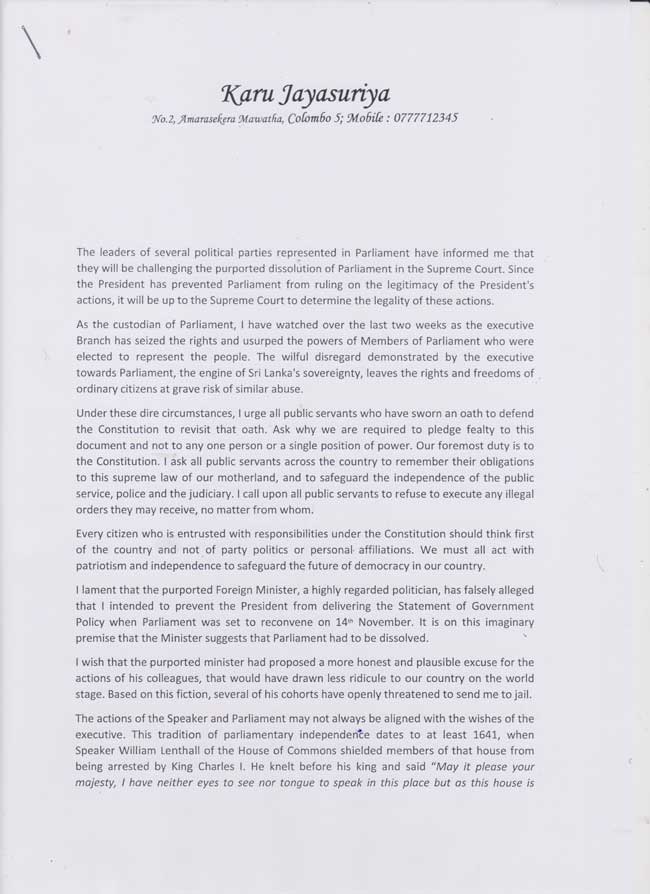