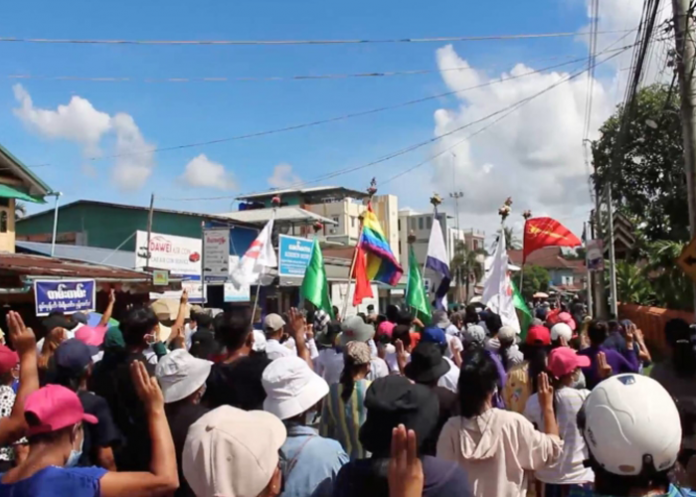 Duwa Lashi La, the acting president of the National Unity Government (NUG), formed by the elected legislators who were thrown out of office by the generals, announced the news in a video posted on Facebook on Tuesday.

“With the responsibility to protect the life and properties of the people, the National Unity Government … launched a people’s defensive war against the military junta,” he said.

“As this is a public revolution, all the citizens within entire Myanmar, revolt against the rule of the military terrorists led by Min Aung Hlaing in every corner of the country.”

Myanmar has been in turmoil since Senior General Ming Aung Hlaing seized power from the elected government of Aung San Suu Kyi just as the new parliament was about to sit. The coup triggered widespread protests and a civil disobedience movement to which the military has responded with force. More than 1,000 people have been killed, according to the monitoring group the Assistance Association for Political Prisoners with thousands arrested.

The deadly crackdown has, in turn, triggered armed resistance to the military’s rule, especially in Myanmar’s borderlands, with opponents joining ethnic armed groups and forming People’s Defence Forces (PDF) to fight back. Tens of thousands have been displaced in the violence.

Diplomatic efforts to end the turmoil have failed to make much headway, despite sanctions from Western countries and pressure from Southeast Asian neighbours.

In his video message, Duwa Lashi La accused the military of committing “war crimes” and called on ethnic groups to “immediately attack” the military.

“Fully control your lands,” he said, while also ordering the PDF militias to “target to control the military junta and its assets” in their respective areas.

Duwa Lashi La also urged military-appointed bureaucrats to resign from the government and called on the border guards and soldiers to “join with the people and attack the people’s enemy”.

“From today onwards, all the civil servants under the military council, we warn and forbid you from going to the office,” he said.

“We will remove Min Aung Hlaing and uproot dictatorship from Myanmar for good and be able to establish a peaceful federal democratic union that fully safeguards equality and is long-aspired by all the citizens.”