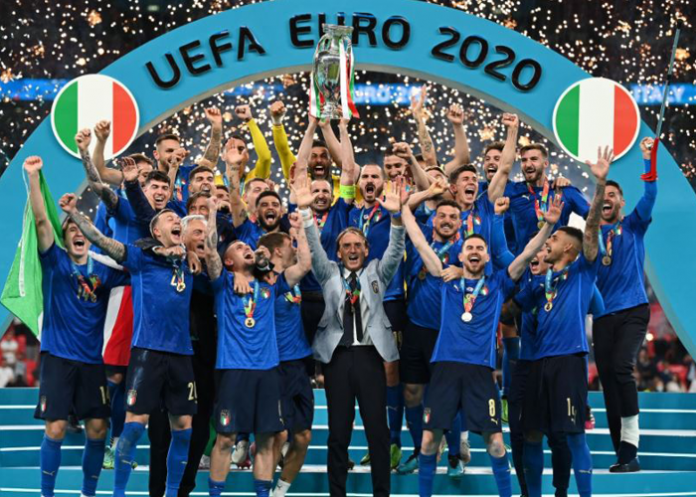 Italy claimed the European Championship for the first time since 1968 as penalties came back to haunt England at Wembley on Sunday, Gianluigi Donnarumma saving twice as the Azzurri won a shootout 3-2 after the game finished 1-1 following extra time.

The giant goalkeeper saved from Jadon Sancho and, decisively, Bukayo Saka after Marcus Rashford hit the post, as Federico Bernardeschi, Leonardo Bonucci and Domenico Berardi all scored for the Italians in the shootout.

Luke Shaw had given England a dream start with a superb goal after two minutes but Italy, who offered almost nothing in response in the first half, gradually took command and deservedly levelled through Bonucci after 67 minutes.

It was the first final decided on penalties since Czechoslovakia beat West Germany in 1976 and was wildly celebrated in Italy after they lost the final in 2000 and 2012.

For England coach Gareth Southgate, who missed from the spot when they lost in the Euro96 semi-final to Germany, it was another shootout horror show.

The two players he sent on late in extra time with penalties in mind missed their penalties, as did 19-year-old Saka, who crumpled under the pressure of taking the final kick.

Italy, have now won five and lost six of their 10 major tournament shootouts, including one win and one loss in World Cup finals, while England’s dismal record now reads seven losses from nine.

But England fans dreaming of a second title to add to the 1966 World Cup can hardly complain they were robbed this time, after their team followed a strong start by surrendering the initiative despite the support from most of the 67,000 crowd.

The match statistics told the story as Italy had 66% possession and 19 shots to England’s six and, until the shootout, Donnarumma barely touched the ball.

Italy are now unbeaten in 34 matches, underlining the stunning turnaround fashioned by coach Roberto Mancini who took over after the country’s humiliating failure to qualify for the 2018 World Cup.