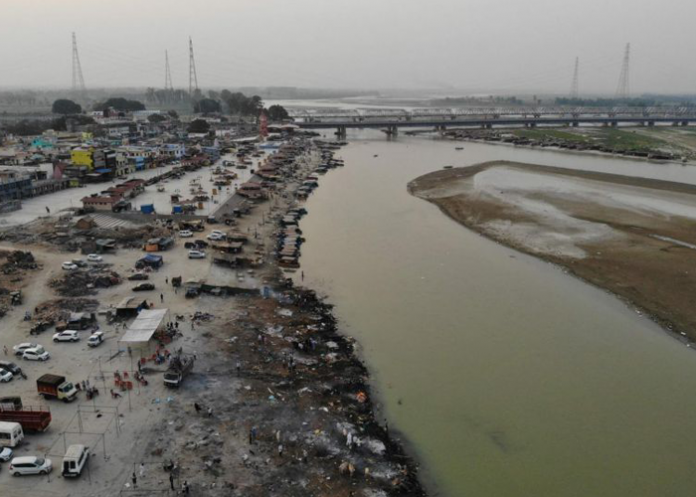 The discovery, near the border between the states of Bihar and Uttar Pradesh, was confirmed to the BBC on Monday.

It is not clear how the bodies came to be there, but local media reports suggest they may be Covid-19 victims.

Some media reports say as many as 100 bodies have been found, and that their condition suggests they may have been in the river for several days.

“There is a possibility that these bodies have come out of Uttar Pradesh,” a local official, Ashok Kumar, told the BBC after questioning local residents.

He said the remains would be buried or cremated.

Officials said the bodies appeared to be bloated and partially burnt, and that they may have ended up in the river as part of the practice of cremating victims of coronavirus along the river Ganges in Uttar Pradesh, India’s NDTV news channel reported.

Some local residents and journalists told BBC Hindi a shortage of wood for cremations and the rising costs associated with funerals were leaving some families with no option but to put the bodies of loved ones who had died from coronavirus directly into the river.

Local resident Chandra Mohan said: “Private hospitals are looting people. Common people are not left with money to pay a priest and spend more on cremation at the river bank. They are asking 2,000 rupees [£20; $27] just to get the corpse out of the ambulance. The river has become their last recourse so people are immersing corpses in the river.”

A second wave of the virus is ravaging parts of India, with deaths rising significantly in recent weeks. Most of the country’s crematoriums have run out of spaces.

The country is now the epicentre of the global pandemic.

India has recorded more than 22.6 million coronavirus cases and 246,116 Covid-related deaths since the start of the pandemic, according to Johns Hopkins University data.

Experts believe the real death toll could be far higher.