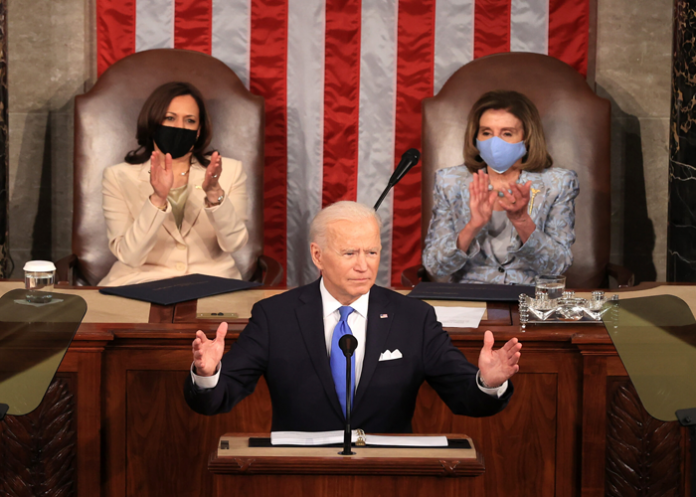 US President Joe Biden has laid out a sweeping investment plan for jobs, education and social care in his first speech to a joint session of Congress. Delivered on the eve of his 100th day in office, the Democrat pitched some $4 trillion (£2.9tn) in spending – the largest overhaul of US benefits since the 1960s, analysts says.

He called it a “once in a generation investment in America itself”. But the plans face a battle in Congress before they can become law.

There has been widespread opposition to the proposals from the Republican Party, which is unlikely to back tax increases and more government spending.

And while there is a slim Democratic majority in both houses, there has been division among the party over how far to go with the plans

In a historic moment, US Vice-President Kamala Harris – the first woman to hold that office – and House of Representatives Speaker Nancy Pelosi both sat behind Mr. Biden during Wednesday night’s address. It was the first time two women appeared behind the president during a speech to Congress.

After addressing Ms. Harris in his opening remarks as Madam Vice-President, Mr. Biden added: “No president has ever said those words from this podium. And it’s about time.”

What did Biden propose?

The 78-year-old president, buoyed by solid approval ratings, presented the American Jobs Plan and the American Families Plan. The White House said the proposals would be funded by tax raises on corporations and the wealthiest Americans.

“It’s time for corporate America and the wealthiest 1%… to pay their fair share,” Mr. Biden said at an event that was scaled back due to the pandemic.

He described the American Jobs Plan as “a blue-collar blueprint to build America” that would boost investment in public transport, high-speed broadband and roads and bridges. He added that the plan would be guided by the fight against climate change.