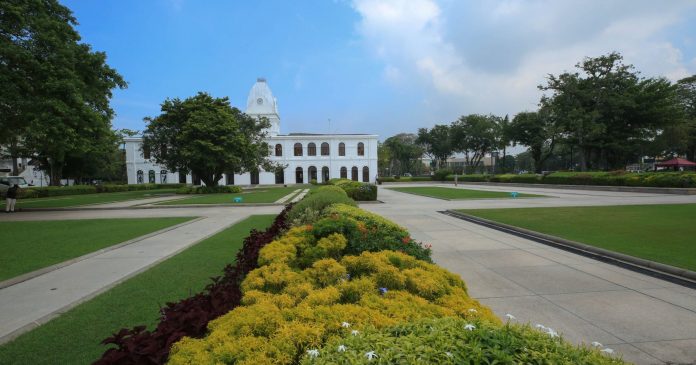 The Urban Development Authority decides to improve the Colombo Arcade premises under private public cooperation and introduce many new elements and provide more quality service to the people.

This is the first time the Softlogic company and the Urban Development Authority signed a rental tax agreement last day, a leading business company in Sri Lanka. The arcade premises were not properly maintained under the previous Yahapalana government.

The tax agreement signed here was transferred between Mr. Sirinimal Perera, Secretary of Ministry of Urban Development and Housing and Mr. Ashok Pathirage, President of Softlogic Company.The signed tax agreement is in power for a 10-year period. Accordingly, the Softlogic company has the right to do all its activities freely, except the ownership of the arcade premises.Under that, all services including management, maintenance, operations, use of building will be allowed to run. Also possessing opportunities that include creating suitable business places for the premises, money control.Four and a half acres of large arcade premises with 42 shop rooms.

The primary focus was on developing cities to create an immediate development plan for Sri Lanka during the post-war season.Under that, the current Colombo city has been restored as the old Colombo city, and the need to preserve and maintain a building tradition that existed in old Colombo. Accordingly, the Arcade premises were set up to run the Freedom Square premises and the surrounding areas as open areas where people can live freely by protecting the old.

Another purpose here has been to get rid of the islanders who were introduced by the Sri Lankan community by implementing more modern city development plans and protecting the old and ancient.Sirinimal Perera, Secretary to the Ministry of Urban Development and Housing, said that the Arcade Freedom Square, belonging to the Urban Development Authority, will be taxed for 10 years under an annual tax paid to the Softlogic Company.′′ We believe they will develop this. Arcade is out of its current situation, we hope to start a very successful and progressive journey.

We believe that our wishes will also be tolerated to achieve their that aspiration, and the plans and determination that have been set in a more different way ′′Mr. Sirinimal Perera, Secretary to the Ministry of Urban Development and Housing, also said.Arcade Freedom Square to Softlogic company under contract in 10 years. The Softlogic company can run business freely according to the agreement.Arcade Complex, belonging to the Urban Development Authority in Colombo Freedom Square, the largest company in the business world, under the key aims of encouraging one-on-one different business places and business owners within the arcade premises, leasing the Softlogic company in the business world The Ministry of Urban Development and Housing will be fulfilled, says.The Ministry of Urban Development and Housing also believes that Softlogic will provide all customers with cheaper and quality service that doesn’t expand borders to traditionalism, new sales and identify customer needs.The Softlogic Company also hopes to introduce a more competitive business opportunity by protecting business owners who continue to stay on the Arcade premises and improving those business locations.

Mr. Ashok Pathirage, President of Softlogic Private Ltd, said here that the Colombo Arcade premises are hoped to turn into a luxury market.′′ The Colombo arcade premises is the best building to be found in Colombo. Arcade Freedom Square to Softlogic Company under lease by Urban Development Authority P. P. A. Aka private public cooperation is the best exemplary to define. We can really be proud of that. It is our ambition to develop this arcade premises as an ultra luxury mall. We believe this process should be done with transparency. Here we have the responsibility to protect transparency from start to finish. Our company does this work not only for foreigners. It is working for Sri Lankans too. Our plans are in progress for freshly made outdoor events, high quality standard weddings.

Highest quality hotels also belong to the same plan. We can’t do all this in one night. Three or four years may take. We need your support for this. We believe that by working in private public cooperation with the Urban Development Authority, we will receive the same support.

Mr. Ashok Pathirage, President of the Softlogic Private Ltd, said.The two parties believe that the experience given to identify the business world, especially the new day-to-day, is not difficult to achieve through the private public coexistence program launched by the Urban Development Authority and Softlogic Company.Softlogic Pvt. has many powerful business opportunities in the business world right now. Sharing it all with the arcade business community working with Softlogic company will be another refreshing experience for the business world.

Arcade premises are not an isolated place but a crowded environment so it’s easy to call customers into this environment and all the business owners on the premises have everything it needs.