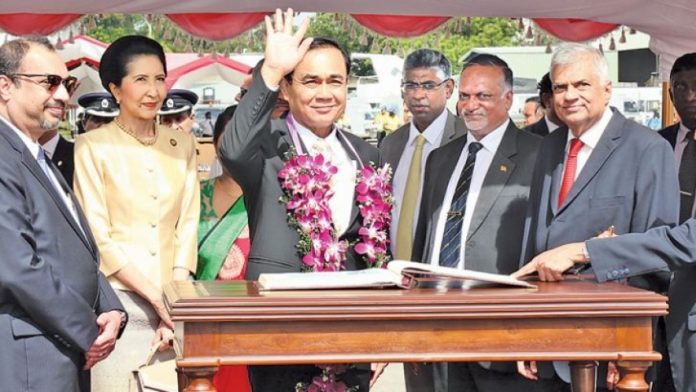 The visiting Prime Minister of the Kingdom of Thailand, General Prayut Chan-o-cha and President Maithripala Sirisena yesterday discussed matters of mutual interest to deepen cooperation between Sri Lanka and Thailand. Following bilateral discussions at the Presidential Secretariat yesterday evening, the two leaders witnessed the signing of four Memoranda of Understanding (MoU) between the two countries.

The four MoU’s are a Treaty between Thailand and Sri Lanka on the Transfer of Offenders and on Co-operation in the Enforcement of Penal Sentences, MoU on Strategic Economic Partnership between the two countries, understanding between Ministry of Social Welfare and Primary Industries and Kasetsart University on Technological Collaboration Related to Value Addition of Primary Products and Joint Action Programme for Cooperation on Sustainable Community Development Model based on the Application on Sufficiency Economy Philosophy in Sri Lanka.

During a lengthy meeting the two leaders extensively discussed on ways to further enhance trade and technical cooperation, President’s media unit said. Thailand Prime Minister had expressed his happiness over the increasing trade and economic cooperation between the two countries and added that this should further enhance in the future. He also promised to look into the possibility of purchasing more tea from Sri Lanka.

The two leaders had also discussed about long standing religious and cultural ties and tourism as well as to exchange views on regional issues. The Thailand Prime Minister also invited President Sirisena to visit his country again to further enhance friendly ties.