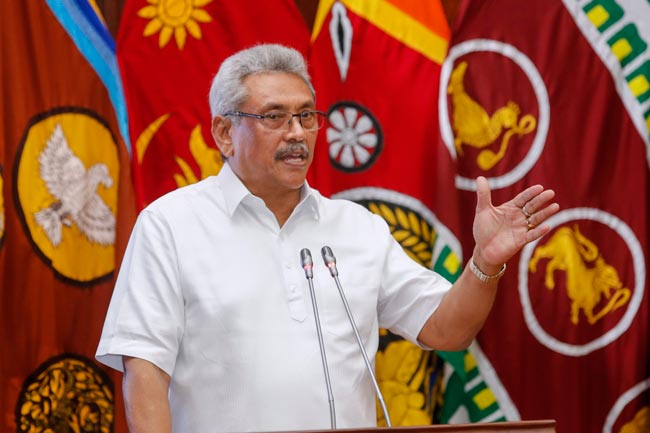 A special program will be launched to mitigate disastrous consequences of landslides that frequently occur in the district, President Gotabaya Rajapaksa has assured the people in Kegalle.

Responding to queries by the public, President Rajapaksa said native crops will receive a higher price in the future as import of minor crops has been halted.

After listening to the public grievances, the President instructed officials to develop Bulathkohupitiya – Yatiyanthota road.

President paid special attention to the request of protecting the youth from illegal drug menace prevalent in the area, the PMD said.

He also attended the public meeting organized by the SLPP candidate Indunil Shantha Gunasekara at Mayurapada College playground where he engaged in cordial discussions with the residents of the area.

Issues faced by the health workers were presented and the people discussed the importance of amending age-old laws in order to revive Co-operative Movement to which President responded positively.

Steps taken by the President for the benefit of the country was highly commended by the people and they pledged to work in utmost commitment to secure two-thirds majority for the incumbent government in the upcoming election.

Earlier in the day, during meetings at Deraniyagala Sirisaman Central College playground and Children’s Park in Deraniyagala, President Rajapaksa stated that priority will be given to promote local rubber cultivation and production while assuring a reasonable price for rubber. This will be instrumental in attracting unemployed persons to the industry, President said. Those who engaged in the rubber industry do not receive a proper price for their products due to the involvement of middlemen. Hence, the number of people occupied in the sector is less, people have pointed out. Spice producers too voiced their grievances.

President also attended public gatherings organized by candidate Y.G. Padmasiri in Dehiowita, Ruwanwella and candidate L.H. Sudath Manjula at Ruwanwella Public Ground. The public commended the new political culture introduced by the President while appreciating the election campaign carried forward without using posters and causing damage to the environment. People apprised the President on the development of byroads including Moraliyagahabada and the problem of drinking water facility.

He also paid attention to the issues faced by the graduates and graduate Samurdhi Officers in the district.

People have also discussed with the President on re-cultivation of abandoned lands belonging to the Janatha Estate Development Board.

President has instructed relevant officials to resolve issues pertaining to the tourist hotspot of Kithulgala.