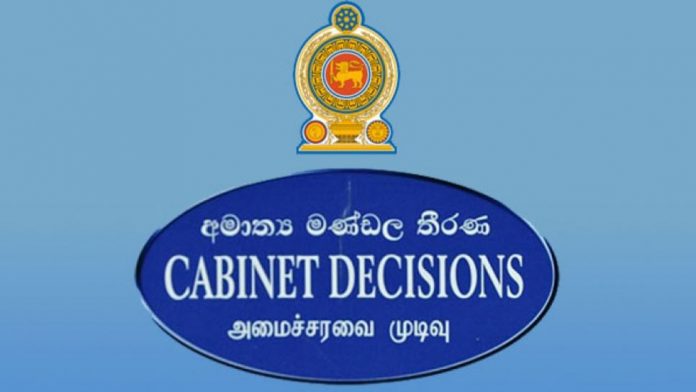 Proponent :- Prime Minister Ranil Wickremesinghe, in his capacity as the Minister of National Policies and Economic Affairs

Description :- Although Cabinet of Ministers has already approved a project for improving the facilities in identified Hospitals, loan facilities could not be obtained from EXIM Bank of China as planned. Considering the importance of early implementation of this project, approval was granted by the Cabinet of Ministers to enter into loan agreements to obtain US$ 72.25 million ( 85 % of the total Project Cost) from Hongkong and Shanghai Banking Corporation Ltd (HSBC) and US$ 12.75 million (15% of total Project Cost ) from Peoples Bank.

3. Introduction of standard packaging (Colourless) for tobacco products (Document No.13)

Proponent :- (Dr.) Rajitha Senarathne, Minister of Health Nutrition and Indigenous Medicine
Description :- Government intended to reduce the death caused by use of Tobacco in the future and it was suggested to introduce the “Standard Packaging” to minimize the attraction. In this standard package only two colours or black and white can be used and no mark can be displayed other than the trade name, Product Name, Quantity of the production and Information or Mark determined or made compulsory by the Government such as health warnings. Cabinet of Ministers approved the proposal submitted by Dr. Rajitha Senarathne to amend the National Authority on Tobacco and Alcohol Act No 27 of 2006 or to instruct the Legal Draftsman to prepare drafts for the regulation under the Act .

Proponent :- (Dr.) Rajitha Senarathne, Minister of Health Nutrition and Indigenous Medicine
Description :- It was proposed to establish a Developed Health Service to provide close health service to the public. Accordingly the proposal for the implementation of “Health Care Policy for Macro Health Care” submitted by Dr. Rajitha Senarathne, Minister of Health and Indigenous Medicine was approved by the Government.

5. Introducing a New National Policy for Fisheries and Aquaculture Fields (Document No.19)

6. Enhancement of aquaculture productivity through conservation and development of aquatic environments associated with lagoons and inland water bodies (Document No.20)

Proponent :- Mahinda Amaraweera, Minister of Fisheries and Aquatic Resources Development
Description :- An amount of Rs. 1,000/- Million has been allocated by the Budget 2018 to implement a project for the conservation and development of aquatic environments associated with lagoons and inland water bodies and for the enhancement of fish production through aquaculture. The proposal to implement this project covering 18 lagoons and 300 Fresh water Tanks in wet zone granting priority to Puttalam, Nayaru, Arugambe, Panama and Rakawa Lagoons.

Proponent :- Duminda Dissanayake, Minister of Agriculture
Description :- Nearly 470,000 Acres , 25% of total Paddy fields in Sri Lanka,have been cultivated using small irrigations consist of Small Lakes, Anicuts and Canals in Dry and Intermediate Zones. This generates livelihood for about 384,000 families. It has been identified that 1,493 small tanks under 87 Cascade Systems spread over 9 Districts in Dry Zone should be reconstructed. Accordingly the proposal submitted to implement a project to enhance the productivity of the cultivations under these tanks, was approved by the Cabinet of Ministers. This project will implement within 2018-2024 under the World Banka Subsidies.

Proponent :- Gamini Jayawickrama Perera, Minister of Buddha Sasana
Description :- Cabinet of Ministers considered the information provided by the Minister of Buddhasasana on State Vesak Festival 2018. According to the Minister, Bingiriya Ancient ajamaha Viharaya will be the main centre of State Vesak Festival 2018. Vesak Sathiya will be commenced on 26 April 2018 and ended on 2nd May 2018.

Description :- After the inquiries and a good debate made among all the respective parties, draft amendment bills have been prepared for the amendments of Construction Industry Development Act. The proposal to instruct the Legal Draftsman to draft legislations for Construction Industry Development Act No. 33 of 2014 , was approved by the Cabinet of Ministers.

10. Bill for the Apartment Ownership Act (Special Provisions) (Document No.34)

Description :- In accordance with the cabinet approval, relevant legislations has been prepared by the legal Draftsman for the enactment of Apartment Ownership (Special Provisions) Act. The Proposal to publish this amendment bill in the gazette and to submit it to the parliament was approved by the Cabinet of Ministers.

11. Action Plan for expediting the activities related to Exploration and Production of Petroleum. (Document No.35)

Description :- It has been planned to enter in to agreements with selected companies to explore the petroleum in Eastern Coastal area and Shallow Sea Areas. The attention is also will be drawn in to the exploration of Petroleum in Land area near the coast. These information were provided to the Cabinet of Ministers by Mr.Arjuna ranatunga Minister of Petroleum Resources Development .

Description :- The Government has entered in to a Policy Agreement to allocate 2 acre land for each estate schools. Since state owned estates have been given back to private companies on lease, lands should be acquired from those companies for this purpose. The combined proposal of Navin Dissanayake Minister of Plantation Industries, Lakshman Kiriella Minister of Public Enterprise and Kandy, and Akila Viraj Kariyawasam Minister of Education to acquire lands (maximum 2 Acre) from respective companies and to grant those for 354 estate schools in 7 Districts, was approved by the Cabinet of Ministers

14. Relief for Affected Parties by the turbulent atmosphere in Digana, Theldeniya areas in Kandy District in March 2018 (Document No.50)

Description :- the Proposal submitted by the Minister of Prison Reforms Rehabilitation , Resettlement and Hindu Religious affairs, to provide R.500,000/= to the relatives of each deceased person and to pay compensations based on Government Medical Reports up to Rs.250,000/= maximum for each injured person, was approved by the cabinet of Ministers.