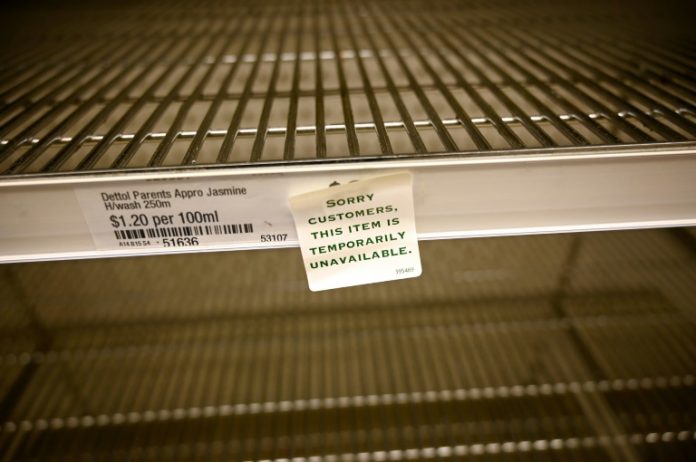 Australia’s biggest supermarket on Wednesday announced a limit on toilet paper purchases after the global spread of coronavirus sparked a spate of panic buying Down Under.

Woolworths said the restriction of four packs of toilet paper per person would apply “to ensure more customers have access to the products”.

Hand sanitisers will also be sold from behind the service counter and restricted to two per person.

“It will help shore up stock levels as suppliers ramp up local production and deliveries in response to higher-than-usual demand,” the company said in a statement.

Despite government assurances, there has been a run on some items at Australian supermarkets, with images on social media purportedly showing shelves stripped of goods and shoppers piling trolleys high with toilet paper.

Police had to be called to a Sydney supermarket at lunchtime Wednesday when a knife was drawn in a toilet paper aisle.

New South Wales Police confirmed officers went to the western Sydney supermarket but said there were no arrests and no injuries.

It is believed a knife was raised in the air by a startled hearing- and speech-impaired customer during a heated exchange over toilet rolls.

Retailers have also experienced shortages of masks and hand sanitisers sparked by fears over the deadly coronavirus outbreak, which has infected more than 90,000 people and killed more than 3,100.

The vast majority of cases have been in China, but South Korea, Italy and Iran have also emerged as hotspots.

Australia has reported 43 confirmed cases of the virus, including one death.

Prime Minister Scott Morrison said he had spoken to the country’s two major supermarket chains — Woolworths and its rival Coles – about their response to panic buying.

“I can understand why people may be concerned, and go to supermarkets, and do those sorts of things. But the advice is that’s not necessary,” he told 2GB Radio on Wednesday.