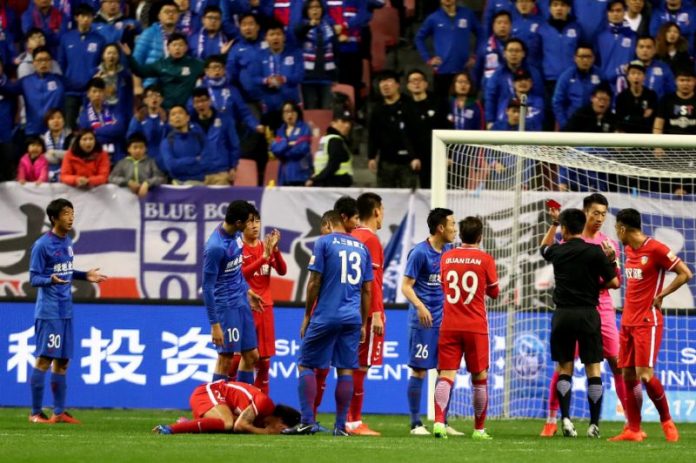 Chinese football dished out two lengthy bans on Wednesday after what has been called the dirtiest start to a Chinese Super League season.

There have been 10 red cards in 24 matches so far this campaign, a record for the CSL, according to Chinese media.

One of those who got his marching orders, Shenzhen captain Ge Zhen, “caused adverse social impact” after planting a boot into the groin of an opponent 10 minutes from time, the Chinese Football Association (CFA) said.

Also hit with a five-game ban and 50,000 fine was the Brazilian Rafael Silva after his dismissal in Wuhan Zall’s 2-1 loss at Jiangsu Suning, also on Sunday.

The forward had an eventful afternoon, scoring a consolation goal but being sent off three minutes later for kicking the ball into the face of a prone Jiangsu player.

His behaviour “caused a bad social impact”, the CFA said.

Silva and Ge will each miss six games in total because the five are added to one for the red card itself, according to local media.

The CFA often issues what fans consider over-the-top punishments, with former Chelsea star Oscar given an eight-game ban in 2017 for starting a melee involving his club Shanghai SIPG.

Five of this season’s red cards came on the opening weekend, after which state media warned a repeat would not be tolerated by football chiefs.

“On the one hand, it is based on the consideration of maintaining the brand of the league,” said Xinhua.

“On the other, it is also for the protection of the players themselves.”