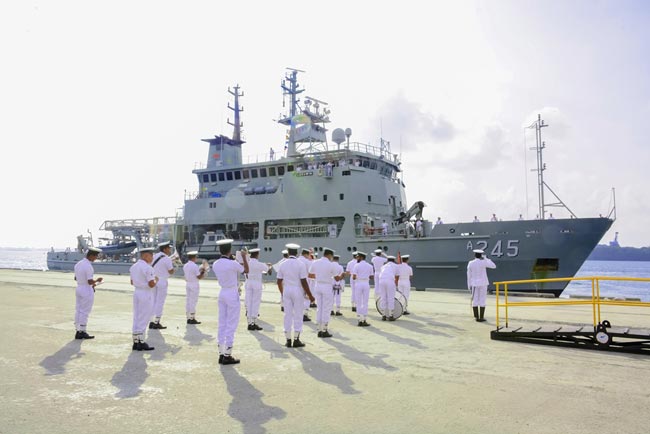 In view of the initial survey of a drowned ship in the seas around Batticaloa during the 2nd World War, two warships of the Royal Australian Navy, ‘Diamantina’ and ‘Leeuwin’, arrived in Sri Lanka on 11th March.

Following a warm welcome by the Sri Lanka Navy in compliance with naval traditions on their arrival, the two warships sailed to Trincomalee harbor today(17th March).

The Commanding Officers of the ships Commander RP Motimor and Lieutenant Commander D. Mackdevitt called on Commander Eastern Naval Area, Rear Admiral Sumith Weerasinghe and held discussions on the matters of mutual interest. Mementos were also exchanged to mark the importance of this occasion.

During their stay on the island, the crew members of ships are expected to take part in a number of programmes including friendly sports activities organized by Sri Lanka Navy.

On completion of their task, the ships are scheduled to set sail from Sri Lanka on 20th of this month, stated the Sri Lanka Navy.