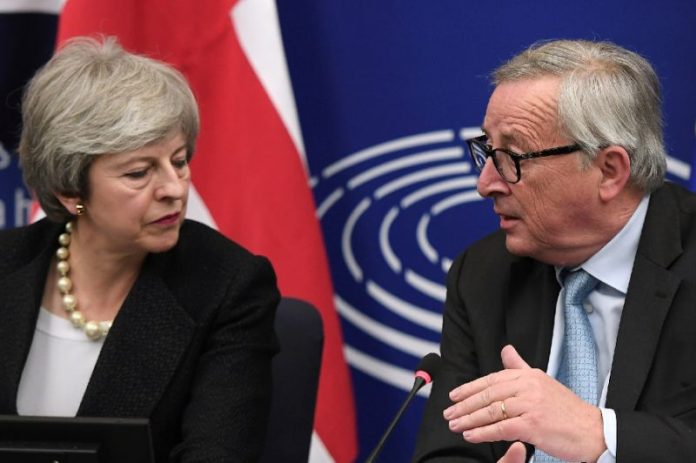 British MPs must decide on Tuesday whether to back Prime Minister Theresa May’s Brexit deal in a vote that could clear the way for Britain to leave the EU on March 29.

As the scheduled departure date loomed nearly three years after Britons voted to leave, May wrung last-minute changes to the deal from the EU in a trip to Strasbourg on Monday evening.

On Tuesday her allies were weighing up whether or not the changes were enough to bring them onside.

They include Brexit supporters in her Conservative Party and their allies in Northern Ireland’s Democratic Unionist Party (DUP) – both of whom rejected the deal in January.

Their support will be crucial in determining whether the deal will sink or float, just 17 days before Britain is scheduled to leave the European Union after 46 years in the fold.

All eyes will be on Attorney General Geoffrey Cox, the government’s chief legal advisor.

He will publish updated advice on the Brexiteers’ key concern: whether Monday’s new agreements could still leave Britain trapped in a permanent customs union with the EU against its will.

“It’s make your mind up time for all of us,” Environment Secretary Michael Gove, one of the few Brexiteers left in the cabinet, told BBC radio.

“If we don’t take the prize tonight, the risk is that we will see a diluted, softer or less palatable Brexit deal.”

The vote in parliament’s lower House of Commons is scheduled to take place from 7:00 pm (1900 GMT).

May raced to Strasbourg late Monday for last-ditch talks with EU leaders in a bid to salvage the Brexit deal agreed between them.

The two sides then announced a three-part package of legally-binding changes to the old agreement.

They are aimed at addressing the key sticking point for British MPs when they rejected the deal in January: the so-called backstop plan to keep the land border between the UK and the Republic of Ireland free-flowing.

“Now is the time to come together, to back this improved Brexit deal, and to deliver on the instruction of the British people,” May said.

European Commission chief Jean-Claude Juncker said: “It’s this deal or Brexit might not happen at all… There will be no third chance.”

But late Monday, Britain’s main opposition Labour Party announced it would vote against the deal.

The agreement “does not contain anything approaching the changes Theresa May promised parliament”, said Labour leader Jeremy Corbyn.

Their rejection of the deal makes the response of the Conservative rebels and the DUP all the more important.

Another defeat on Tuesday would tee up additional votes on the way ahead.

If the deal is voted down, MPs will vote on Wednesday on whether Britain should simply leave on March 29 without any deal at all.

That option is fraught with economic dangers and is backed only by hardcore proponents of the divorce.

If MPs vote against a “no-deal” scenario, they would vote again on Thursday on requesting a delay to Brexit from the EU.

The other 27 nations would need to back the extension unanimously and decide how long it should be. Their leaders will meet in Brussels for a summit on March 21-22.

Any postponement may have to be short-lived.

Juncker on Monday said a delay beyond European Parliament elections at the end of May would mean Britain would have to take part in the polls.

The problematic backstop was designed to keep the border on the island of Ireland — between EU member the Republic of Ireland and Northern Ireland, which is part of the UK — invisible and free-flowing.

If new trade arrangements between Britain and the EU cannot be agreed, the UK would stick closely to EU trade rules until the sides reach a new trade deal.

But those who back Brexit fear getting trapped in a quasi-union with Europe indefinitely.

“Brexit has been a dark cloud over us for many months, and particularly the threat of no deal,” he said in a statement.

“A positive vote tonight can remove that cloud and restore confidence and optimism in Britain, Ireland and across the European Union.”

Dutch Prime Minister Mark Rutte also said he was pleased with the agreement.

“An orderly Brexit is crucial for both the EU and the UK. I hope that the House of Commons will support the agreement reached by Theresa May. There is no alternative,” he said.

The pound extended its rally in Asian trade on Tuesday. Sterling has risen about 1.5 percent against the dollar since late Friday, while it is up around two percent on the euro.