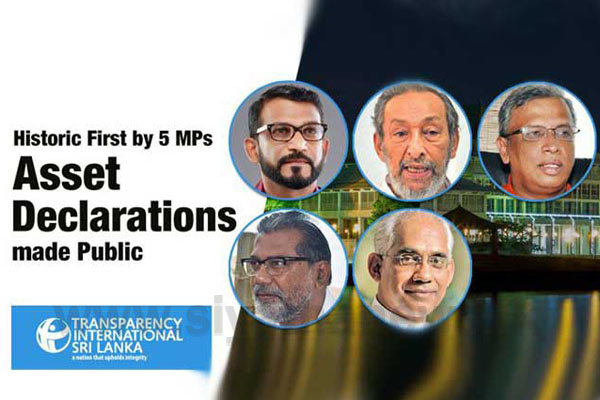 A group of members of the parliament published their Declarations of Assets and Liabilities at an event organized by the Transparency International Sri Lanka (TISL).

The press conference organized by the TISL to publish asset declarations of parliamentarians was held at Hotel Nippon in Colombo this morning (28).

Stating that this is a major step towards an open parliament and a strong democracy, TISL stated that, this will mark a historic event in Sri Lanka’s political history as it is the first time that a group of MPs from multiple political parties has come together to make this information public.

Speaking at the event MP Vidura Wickramanayaka stated that this event would be considered a failure if this action stops from this 5 parliamentarians.

He elaborated that people should impel their representatives to publicly declare their assets and liabilities.

State Minister Eran Wickramaratne states that when he first entered politics he was told not to as ‘people enter politics to steal’. He said that, although they represent different parties, all 6 MPs present at the event are in the view that politics should be transparent in nature.

Wickramaratne stated instead of this procedure, all asset declarations should go through only one person to assure further transparency.

The State Minister said that he believes that when an MP becomes the part of the Executive as a Cabinet Minister, they should discontinue engaging in their profession or businesses and become completely independent.

This is to avoid issues regarding the intention of the policy decisions made by the relevant Minister, he added.

Parliamentarian Tharaka Balasuriya stated that this publishing of assets declaration was a step towards forming a new political culture.

He says that if there is no legal foundation for this, MPs should voluntarily come forward and act with transparency.

MP Balasuriya stated that this effort is a message to broaden transparency. According to him, not only MPs, other officials, and institutes, too should act with transparency on their assets and liabilities.