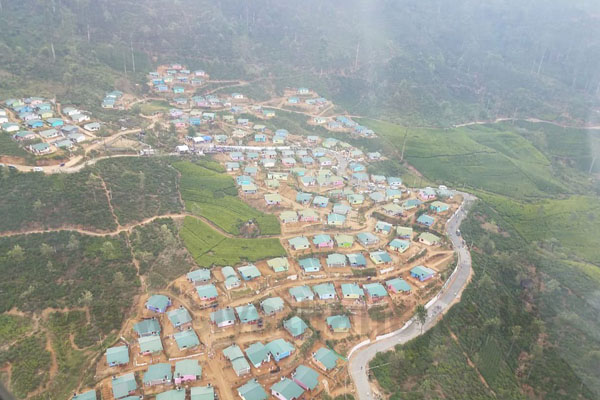 As many as 155 houses, build as part of India’s ongoing housing project in Sri Lanka, were on Sunday (24) handed over to estate workers in Hatton, located in the Central Province.

The effort is part of India’s pledge to help construct 63,000 houses in Sri Lanka – including 46,000 homes built in the war-hit north and east – with a grant of $350 million, the largest Indian grant assistance project in any country abroad.

Prime Minister Ranil Wickremesinghe, Minister for Hill Country New Villages, Infrastructure & Community Development Palany Thigambaram and Indian High Commissioner to Sri Lanka Taranjit Singh Sandhu were present at the ceremony held on Sunday, to mark the completion and handing over of the 155 houses.

The houses have come up at a cost of about LKR 10 lakh each (roughly ₹4 lakh). Of the 14,000 houses coming up in the hill country with Indian aid, 1,000 have been completed, 3,000 are under construction and work on the remaining are expected to commence soon, officials said.

The newly-constructed houses will enable families of estate workers to move out of the cramped, colonial-era line rooms, into individual units.

Thousands of Malayaha Tamils, whose ancestors the British brought down from South India to the plantations in Central and Southern Sri Lanka, continue to toil in the tea estates, under rather exploitative conditions. The workers help Sri Lanka earn crucial foreign exchange, but their own housing, sanitation, education and health needs remain largely neglected. They are currently campaigning for a basic wage of LKR 1,000 (roughly ₹ 400). After several rounds of negotiations, their employers recently agreed to pay them LKR 800.