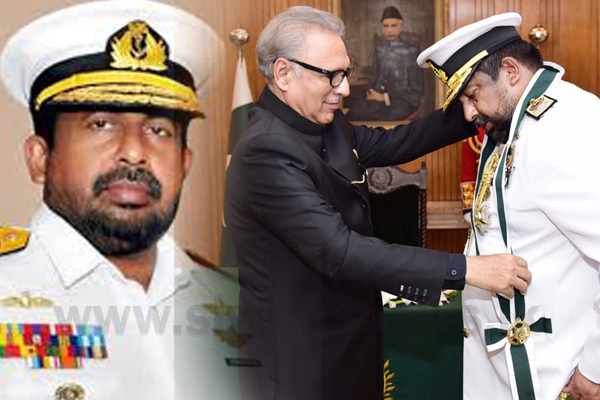 Speaking on the occasion, the Pakistani president emphasized that Pakistan attached great importance to its relations with Sri Lanka which had stood the test of time.

He added that bilateral relations between the two countries had always been marked by mutual respect, understanding and close cooperation.

He stated that cooperation in the field of defense was an important aspect of Pak-Sri Lanka multi-faceted relationship.

The Pakistani president highlighted that Pakistan had been a partner of Sri Lankan Armed Forces for enhancing their capacity by providing a large number of vacancies in its institutions.

He appreciated Sri Lankan Navy’s participation in AMAN-2019 with assets and observers.

He said Pakistan was home to the Buddhist Civilization and heritage, and the government had taken a number of initiatives to promote cultural and tourism cooperation with Sri Lanka.

Admiral Ravindra Chandrasiri Wijegunaratne thanked the Pakistani president and the Government of Pakistan on being awarded NI (M) and hoped that bilateral relations between the two brotherly countries would further grow in future.