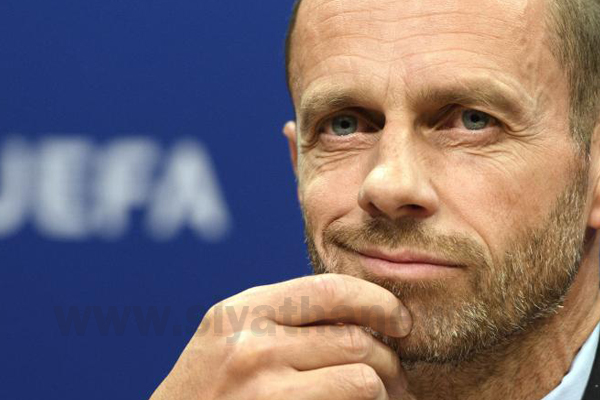 Two and a half years after becoming UEFA president in the wake of the scandal that brought down Michel Platini, Aleksander Ceferin will win a new four-year term at the head of European football’s governing body on Thursday.

The 51-year-old Slovenian lawyer — who saw off the Dutchman Michael van Praag in 2016 – is the only candidate this time in the election for the UEFA president, which will be take place at the organisation’s Congress in Rome.

Previously the head of the Slovenian Football Federation, Ceferin’s presidency so far has been marked by his discretion and a less charismatic approach than that of Platini.

The Frenchman is still suspended until October this year, when he will complete a four-year ban from all football-related activities following the corruption scandal that also brought down then-FIFA chief Sepp Blatter.

“The situation was ideal. The biggest scandal had tarnished football’s image,” Ceferin admitted during a recent speech to students in Ljubljana as he discussed the situation when he took over.

“I stood. I was underestimated and when (opponents) realised the situation, it was too late.”

Since then, Ceferin — recently ranked just behind Melania Trump among the most influential Slovenian citizens in the world by Slovenian magazine Reporter – has imposed his own, more understated, style.

His most notable achievements have been introducing term limits for UEFA presidents – to a maximum of three four-year stints — and, according to one of those close to him, “maintaining unity in European football”.

Having previously been largely charged with putting in place measures voted for under the previous regime of Platini and Gianni Infantino, Ceferin can now hope to really make his mark and implement his own changes.

“You can see with him a desire to give more of a place to the smaller clubs and nations with the creation of a third European club competition and the Nations League. But it is too soon to say if that will make a difference,” says Didier Primault, director of The Centre of the Law and Economics of Sport in the French city of Limoges.

The biggest bone of contention moving forward is the plan of Infantino – now FIFA president – to introduce a new, expanded Club World Cup and global Nations League. Determined to protect UEFA’s own Champions League and recently-introduced Nations League, Ceferin is opposed to those ideas.

Reforms to the Champions League which mean the continent’s leading four leagues — Spain, England, Germany and Italy — now all get four automatic qualifying spots in the group stage were initially proposed by Platini but brought in under Ceferin’s presidency.

Nevertheless, the Slovenian has sought to champion the rights of clubs from smaller countries, and he must look for ways to restore competitive balance, something he recently said was his “greatest challenge” going forward.

Late last year UEFA confirmed plans to bring back a third European club competition from 2021/22, which would have 32 teams mainly from smaller member associations.

Meanwhile, Ceferin will also have to deal with the burning issue of Financial Fair Play (FFP) – can he restore faith in what was one of Platini’s flagship projects at a time when many feel clubs such as Paris Saint-Germain and Manchester City have pushed its credibility to the limits?

And in the background there is the question of whether he might one day seek to take the step from UEFA to FIFA.

“For the moment I am not interested in the FIFA presidency at all. But if you ask me if I will be in four, eight or 10 years, I can’t say yes or no,” he said recently.