Cloudy skies can be expected over Northern, North-Central, North-Western and Western provinces.

Showers or thundershowers will occur at times in Northern and North-Central provinces and Puttalam district. Fairly heavy falls above 75mm are likely at some places.

Showers will occur at several places in Western, Sabaragamuwa and Central provinces and in Kurunegala and Galle districts.

Showers or thundershowers may occur at a few places in Uva province after 2.00 p.m. 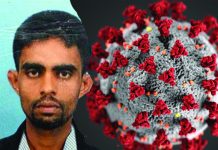