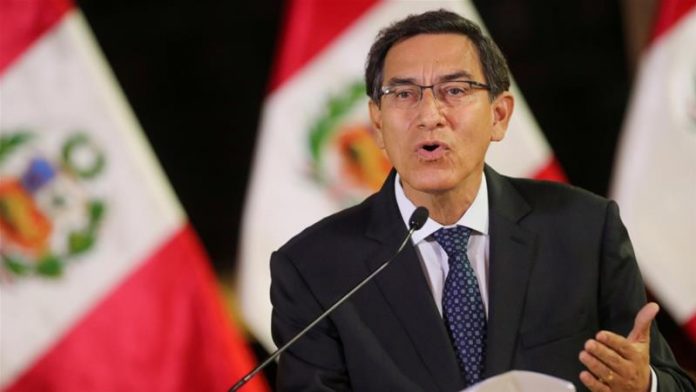 Peru’s Congress has voted to open impeachment proceedings against President Martin Vizcarra for “moral incapacity” amid allegations he tried to obstruct an investigation into nearly $50,000 in government contracts handed to a little-known singer.

Friday’s motion was approved by 65 votes, with 36 against and 24 abstentions.

Fifty-two votes from the 130-member Congress were required to start the proceedings next week, and 87 votes will be needed to remove Vizcarra from office.

Six out of nine parties – representing 95 of the 130 seats in Congress – have backed the motion.

The move risks plunging Peru further into crisis as it battles one of the world’s worst coronavirus outbreaks. The Andean country is also in the throes of an economic crisis, with the pandemic slashing its second-quarter GDP by 30 percent.

Vizcarra, who lacks a party and has been in power since 2018, vowed not to resign.

Last September, Vizcarra faced down a previous attempt to impeach him for incapacity and dissolved Congress.

The latest crisis began on Thursday when opposition legislator Edgar Alarcon presented Congress with three audio recordings that he claims show the president tried to get his aides to cover up meetings with Richard Cisneros, an artist who was awarded government contracts for motivational talks worth 175,400 soles ($49,500) at the height of the pandemic.

The deals with Cisneros, who goes as Richard Swing, are being investigated by the parliament and Peru’s auditor general.

Cisneros was involved in the campaign of Pedro Pablo Kuczynski, who resigned as president in 2018 and was replaced by Vizcarra, then the vice president.

In the audios, Vizcarra acknowledges having two meetings with the singer and appears to instruct his staff to downplay the meetings.

Critics say the meetings and contracts show a pattern of favouritism, but Vizcarra denies any wrongdoing.

The president acknowledges knowing Cisneros but said he had no role in any contracts given.

He told reporters on Friday that the latest challenge represented “a plot to destabilise the government”.

“I am not going to resign, I have a commitment to Peru and I will fulfill it until the last day of my mandate,” he said.

Presidential elections are due to be held next year and Vizcarra has already said he will not run again.

“Peru’s democracy is unfortunately sinking further and further into crisis,” said Steve Levitsky, a political scientist at the Harvard University. “The removal of the president is a really big deal, and it requires serious deliberation, public debate and investigation. There has been none.”