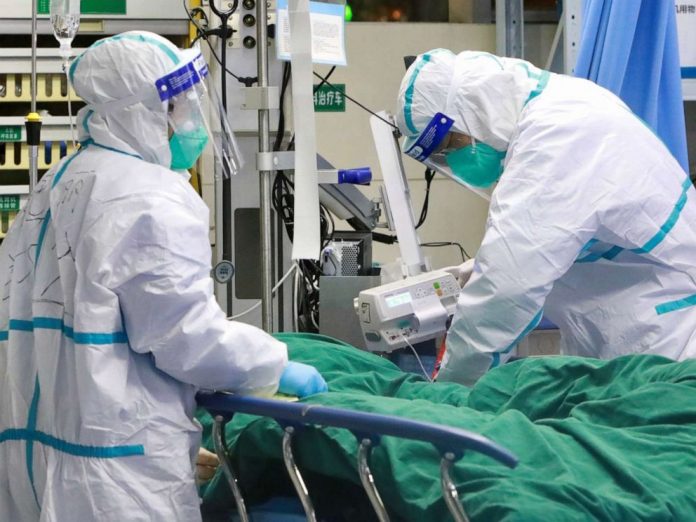 Authorities say one case is imported and the other is local; South Korea reports 13 new cases, of which 10 are imported.

03:05 GMT – Roche gets US FDA approval for antibody test

Roche Holding AG says it has received emergency use approval from the US Food and Drug Administration for an antibody test to help determine if people have ever been infected with the coronavirus.

The Swiss drugmaker says its antibody test, Elecsys Anti-SARS-CoV-2, has a specificity greater than 99.8 percent and can help assess patients’ immune response to the new coronavirus, officially known as SARS-Cov-2.

Health authorities in South Korea are reporting 13 new coronavirus cases, of which 10 are imported.

The country has reported fewer than 15 cases for more than two weeks now and authorities say they plan to loosen social distancing rules this week. Details of the so-called “everyday life quarantine” are expected later today, according to the official Yonhap news agency.

The spread of the coronavirus in India’s notoriously crowded prisons has prompted authorities to impose jail lockdowns and release thousands of pretrial detainees on parole, as health experts worry that the cramped facilities are serving as breeding grounds for the disease.

“It is a terrifying situation. If measures aren’t taken soon, then things can become extremely difficult,” Madhurima Dhanuka, head of the Prison Reforms Program for the Commonwealth Human Rights Initiative, told the Associated Press news agency.

Although there are no official numbers on how many inmates have been infected by the virus, India’s correction facilities are slowly recording more infections and have temporarily banned visitors.

On Thursday, authorities locked down Nagpur Central Jail in coastal Maharashtra, among the Indian states worst hit by the pandemic. It was the eighth prison in Maharashtra to be locked down. The move came after 19 inmates in Indore Central Jail in central Madhya Pradesh state tested positive for the virus on Tuesday.

Indian prisons are highly overcrowded. According to the latest data by the National Crimes Record Bureau in 2018, India has some 450,000 prisoners, exceeding the country’s official prison capacity by about 17 percent.

Prisons in New Delhi and neighboring Uttar Pradesh state have the highest occupancy rates, at over 50 percent above capacity.

Making matters worse, “the health facilities in prisons are not up to the mark,” said Dhanuka.

China is reporting two new coronavirus cases for May 2, up from one the day before, according to data from the National Health Commission.

One case is imported and the other is local. This compares to one imported case and no domestic transmissions on May 1. The NHC is also reporting 12 asymptomatic cases for May 2, down from 20 the day before.

The number of confirmed cases in China has reached 82,877. With no new deaths reported, the death toll remains at 4,633.

01:46 GMT – Hundreds in US state of Oregon protest stay-at-home order

Hundreds opposed to Oregon’s stay-at-home order demonstrated in the city of Salem as health officials announced five additional deaths from COVID-19, the respiratory illness caused by the coronavirus.

Most of the protesters did not wear face masks, but they waved American flags and Trump campaign signs in the rain. Other signs read “Reopen Oregon” and “Let me earn a living”.

A group of healthcare workers demonstrated at the top of the Capitol steps, urging a phased plan to ease the state’s social distancing requirements. Most of the other protesters ignored them. 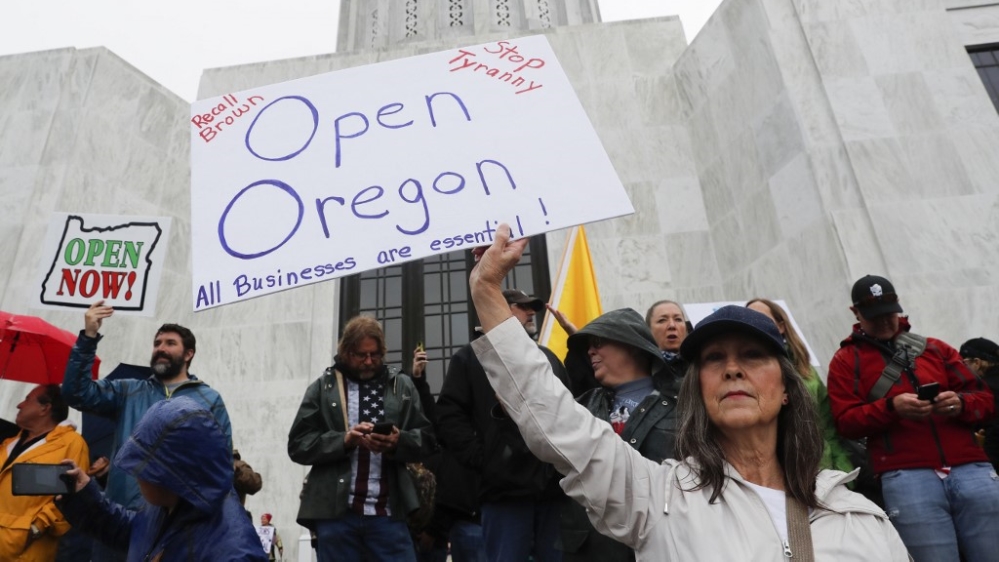 A woman holds a sign saying Open Oregon on the steps of the state capitol at the ReOpen Oregon Rally on May 2, 2020 in Salem, Oregon

The top Republican and Democrat in Congress say they are respectfully declining an offer of quick COVID-19 tests offered by the Trump administration.

Democratic House Speaker Nancy Pelosi and Republican Senate Majority Leader Mitch McConnell, normally fierce political rivals, say Congress is “grateful” for the offer, but “wants to keep directing resources to the front-line facilities where they can do the most good the most quickly”.

The US’s 100 senators, many of whom are advanced in age, will return to Washington on Monday following a recess that was prolonged due to the pandemic.

Taha Al-Mutawakel, the Houthi public health minister, urged the United Nations to increase the number of testing kits for COVID-19.

“We are sending this appeal given the global situation of coronavirus, the ongoing assault against our country, the embargo on our country, and because the amount of the PCR tests which the World Health Organization has sent to us is very little and is about to run out,” he told reporters in Sanaa on Saturday.

The UN’s Office of the High Commissioner for Human Rights is calling for an investigation into a prison riot in western Venezuela that left 46 people dead and 75 injured.

The OHCHR says on Twitter that it is “gravely concerned” about the incident on Friday at the Los Llanos penitentiary in Portuguesa state. The South American country’s prisons are infamous for extreme levels of violence and poor conditions.

“We urge the authorities to conduct a thorough investigation, tackle overcrowding, and guarantee basic rights,” the office says.

The riot came shortly after prison officials barred inmates’ family members from bringing them food, a measure to prevent the spread of the coronavirus within prisons.

Prison authorities in Brazil say 10 guards and five inmates suffered non-critical injuries following an uprising at a prison in Manaus, a state capital in the Amazon rainforest.

The inmates held seven guards hostage for more than five hours, but the situation has been brought under control, according to the state’s public security secretariat.

Relatives of inmates say the prisoners at Puraquequara prison were protesting the suspension of all family visits and poor conditions at the lockup amid the coronavirus pandemic.