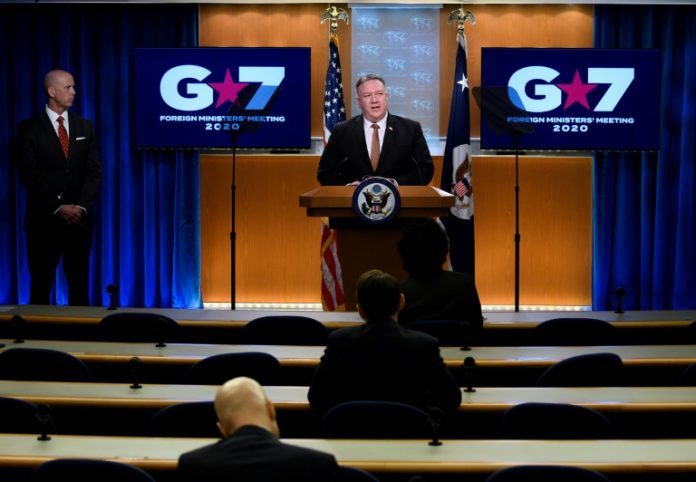 US Secretary of State Mike Pompeo said Wednesday that the Group of Seven powers were united in opposing China’s coronavirus “disinformation,” but European allies emphasized cooperation to fight the global pandemic.

Foreign ministers from the major industrialized democracies spoke about the crisis by videoconference, scrapping a meeting scheduled in Pittsburgh, but any hope of showing a common front was eroded by the absence of a joint statement.

Pompeo, a sharp critic of Beijing who has gone on the offensive over what he calls the “Wuhan virus,” said he shared a common view with the top diplomats of the other G7 countries – Britain, Canada, France, Germany, Italy and Japan.

“Every one of the nations that were at that meeting this morning was deeply aware of the disinformation campaign that the Chinese Communist Party is engaged in to try and deflect from what has really taken place,” Pompeo told reporters.

Pompeo said that China “has been and continues to be engaged in” a campaign through social media that has included conspiracy theories of US involvement.

“This is crazy talk,” he said.

A Chinese foreign ministry spokesman infuriated President Donald Trump’s administration by suggesting on Twitter that US troops brought the virus to Wuhan, the metropolis where it was first detected late last year.

The virus has killed more than 21,000 people globally, but Beijing has appeared to bring it under control and has sent aid overseas – including 40 tons of medical supplies to US ally Italy, which has the world’s highest death toll.

Pompeo minimized China’s efforts and pointed to a US Air Force cargo plane’s aid delivery to Italy as well as private US charity efforts.

China is “now making small sales of product around the world and claiming that they are now the white hat in what has taken place,” Pompeo said.

But he also said the United States sought cooperation, including with China. The two countries’ leaders are set to take part in a virtual summit on the crisis Thursday of the Group of 20 major economies.

“We desperately want to work with every country around the world. This is a global pandemic,” Pompeo said.

– France warns not to ‘exploit’ crisis –

The German magazine Der Spiegel, quoting anonymous diplomats, said that the joint statement was scuttled by Pompeo’s insistence that it use the term “Wuhan virus” – a formulation frowned upon by medical professionals who say it is stigmatizing.

Pompeo did not deny the report when asked about it, saying that each minister would speak separately but that they had a “common understanding” on the health and economic crisis caused by the “Wuhan virus.”

France and Germany issued statements on the G7 talks that made no mention of China. Canada said China was raised in “broader discussions.”

French Foreign Minister Jean-Yves Le Drian “underscored the need to combat any attempt to exploit the crisis for political purposes,” a statement said, in likely a veiled response to Pompeo.

Le Drian “expressed the view that the unity of all in order to effectively combat the pandemic must now take precedence over any other considerations,” it said.

France called for the G7 to find ways to assist Africa, warning that both the continent’s healthcare system and economies were ill-equipped for the global crisis.

Pompeo has accused China of putting the world at risk by initially suppressing news of the virus. Beijing in turn has accused the Trump administration of seeking a scapegoat for its own failures.