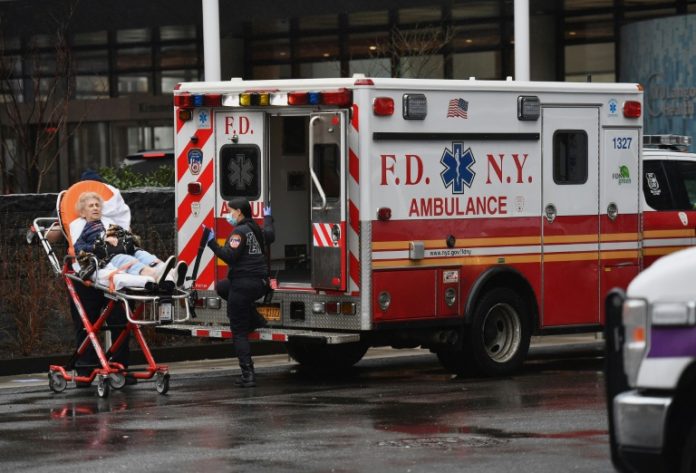 Anxiety ratcheted up Monday across an eerily deserted New York, America’s coronavirus epicenter, but President Donald Trump said he’d soon call for lifting the lockdown in some parts of the country.

Trump – who faces reelection in November and is keen to avoid extended economic damage – told reporters he would be “opening up our country to business because our country was meant to be open.”

The relaxation could be announced early next week when a 15-day period recommending tight restrictions on social distancing expires, he said, stressing that governors would make final decisions in their own states.

As the number of deaths in the United States from COVID-19 soared past 550, with more than 41,000 declared cases, the Big Apple found itself the US bullseye of the global pandemic.

With millions of residents ordered to stay home and non-essential businesses and schools closed, the city that never sleeps is bedding down for an uncertain slumber.

For Christian Hofer, and his wife and two young children, the hardest is not knowing how long the unprecedented measures are going to last.

“It goes from a range of emotions, from feeling very nervous about the situation to feeling like how absurd it is,” the 42-year-old Wall Street trader told media

New York City has now seen more than 12,000 confirmed cases and almost 100 deaths in the outbreak, which first appeared in the United States in Washington state.

With only essential workers, such as pharmacists, grocery store workers and nurses and doctors, headed to work Monday, rush hour in the city was more like a trickle of traffic.

“I’m scared for me and patients that this could go on” for months, said Lauren, a psychologist who declined to give her surname.

Anxiety and depression “all gets heightened at a time like this,” she added, one of the few souls out and about on Manhattan’s Upper East Side.

On the New York Stock Exchange, the opening bell, usually greeted by cheering and clapping, was met with silence as the first day with no floor trading took place.

Only electronic trading occurred as stocks plunged deep into the red shortly after midday, with both the Dow and the S&P 500 down almost five percent.

In Congress, efforts to advance a nearly two-trillion-dollar rescue of the economy failed for a second straight day after Democrats said the Republican proposal insufficiently protected workers.

Trump said he wanted to get restrictions on movement lifted where possible, so that people can get back to work. He acknowledged that medical advisors focused more on public health than the economy may not agree with his decision.

“The doctors, if it were up to them, they may say ‘let’s keep it shut down, let’s shut down the entire world,'” Trump said.

Mayor Bill de Blasio warned New York was just at “the beginning” of dealing with the epidemic as soldiers from the National Guard began converting a convention center into a facility with hospital beds.

De Blasio added that the city’s overwhelmed public hospitals have only enough medical supplies to last the week and pleaded with the federal government to speed up production.

“If that doesn’t come in starting this week, we will get to a point where people can’t be saved who could have been saved,” he said.

He said Trump should be calling a nationwide lockdown similar to those introduced locally in New York, California and Illinois. Trump has ruled that out.

Around a third of Americans are living under various phases of lockdown.

On Monday, Michigan and New Mexico became the latest states to sign a “shelter-in-place” order, as Ohio’s and Louisiana’s took effect.

Defense Secretary Mark Esper said hospital ship USNS Mercy should arrive in Los Angeles later this week and in a couple of weeks the USNS Comfort would head to New York to boost medical capacity.

US Surgeon General Jerome Adams warned that case numbers across America were going to get worse before they get better.

“We really need everyone to understand this is serious, to lean into what they can do to flatten the curve.”