At least 38 people were killed after Myanmar’s security forces opened fire on young peaceful protesters in towns and cities across the Southeast Asian nation Wednesday, in scenes described as “a war zone.”Thousands of protesters have taken to the streets in the weeks since a military coup on February 1. Security forces have intensified their response in recent days, opening live fire into crowds and using tear gas, flash bangs and stun grenades on demonstrators.

Images and footage from Wednesday show bodies lying in the street surrounded by pools of blood as protesters run to take cover.The United Nations said the total death toll since the coup had risen to 50, though activists put that total as higher.”Today was the bloodiest day since the coup happened,” Special Envoy Christine Schraner Burgener told a briefing Wednesday. About 1,200 people have been detained, with many relatives unsure where they are being held, she added.”Every tool available is needed now to stop this situation,” Burgener said. “We need a unity of the international community, so it’s up to the member states to take the right measures.”CNN reached out to the ruling military regime via email but has not yet received a response.

Protesters run from police firing tear gas during a pro-democracy demonstration in Mandalay, Myanmar, on Wednesday.Protesters have for weeks demanded the release of democratically elected officials — including the country’s leader, Aung San Suu Kyi — who are in detention. Suu Kyi’s National League for Democracy Party won a landslide victory in November elections; military leaders allege voter fraud but have provided no proof for their claim.Burgener said in discussions with the military, she had warned that the UN Security Council and member states were likely to take strong measures. “The answer was: ‘We are used to sanctions, and we survived those sanctions in the past’,” she said.”When I also warned they will go in an isolation, the answer was: ‘We have to learn to walk with only few friends’.”

Security forces — including members of the military’s Light Infantry Divisions long documented to be engaged in human rights abuses in conflict zones throughout the country — escalated their deadly crackdown on peaceful demonstrators this week.”Today, the country is like the Tiananmen Square in most of its major cities,” the Archbishop of Yangon, Cardinal Charles Maung Bo, said on Twitter.In one instance, Myanmar security forces were caught on camera beating emergency service personnel with the butts of their guns, batons and kicking them in the head, according to activist group Assistance Association for Political Prisoners (AAPP).

The AAPP released the video on Wednesday and said in a statement it was from North Okkalapa, in Yangon. The video provides a glimpse into the brutal methods deployed the security forces.In the footage, three charity workers are asked to get out of their ambulance van at gunpoint, and then made to kneel on the floor with their hands behind their heads.Two uniformed police officers start hitting the men in the head with their guns and batons and also kick them.

A few moments later a group of police officers with shields and members of the military join in, violently hitting the charity workers.”The military is treating peaceful protestors in Yangon as a war zone. The military is creating terror, again,” AAPP said.CNN does not know why the charity workers were stopped by the security forces.The AAPP said live ammunition was used against protesters in at least seven towns and cities Wednesday.

Among those killed was a 19-year-old girl in the second-biggest city Mandalay. Her image flooded social media sites, showing her wearing a T-shirt that read “Everything will be OK.” Reuters reported she was shot in the head by security forces.In Myanmar’s biggest city, Yangon, witnesses told Reuters at least eight people were killed when security forces opened fire with automatic weapons in the early evening.”I heard so much continuous firing. I lay down on the ground, they shoot a lot and I saw two people killed on the spot,” protester Kaung Pyae Sone Tun, 23, told Reuters.Another heavy toll was in the central town of Monywa, where six people were killed, the Monywa Gazette reported. Others were killed in various places including Mandalay, the northern town of Hpakant and the central town of Myingyan, according to Reuters.Rights group Fortify Rights said Thursday that “the similar use of excessive and lethal force by security forces in towns and cities throughout the country demonstrates coordination between units and an overarching national strategy.””This isn’t a non lethal tactic to disperse protesters.

This is an attack on peaceful protesters throughout the country,” said John Quinley, Senior Human Rights Specialist at Fortify Rights. “And these are not crowd control techniques, this is an attack on civilians and people protesting against the military takeover.”The rights group said photographs and videos from Wednesday show soldiers holding automatic weapons, long-range sniper rifles, and other firearms.World leaders have called for Myanmar’s elected leaders to be restored.”The use of lethal force against peaceful protestors and arbitrary arrests is unacceptable,” read a February 28 statement by UN Secretary General Antonio Guterres’ spokesman, which also urged the international community to “send a clear signal to the military that it must respect the will of the people of Myanmar as expressed through the election.” 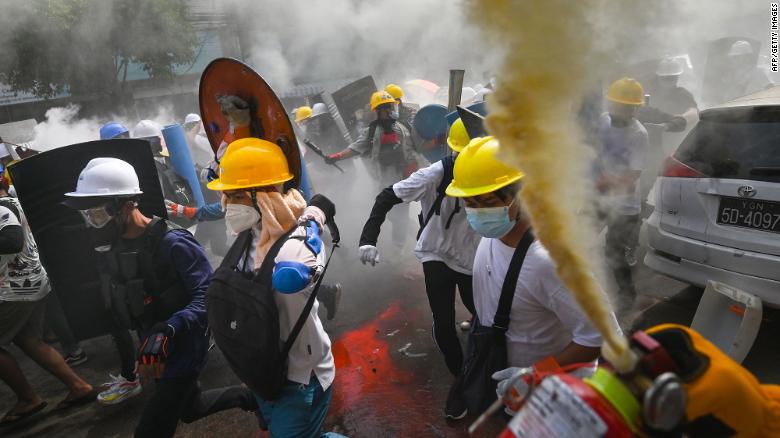 A protester uses a fire extinguisher as others holding homemade shields run during a demonstration in Yangon on Wednesday.

A speech by Myanmar’s Ambassador to the UN, Kyaw Moe Tun, prompted rare applause last week, after he said he represents the country’s civilian government and called on the international community to use “any means necessary” to help end the coup.On Wednesday, a deputy ambassador from Myanmar, U Tin Maung Naing, resigned after military rulers named him to replace Kyaw Moe Tun.

The US State Department condemned the violence, saying Washington is reviewing policy options to respond to the recent escalations.”We are appalled and revulsed to see the horrific violent perpetrated against the people of Burma for their peaceful calls to restore civilian governance. We call on all countries to speak with one voice to condemn brutal violence by the Burmese military against its own people and to promote accountability for the military’s actions that have led to the loss of life of so many people in Burma,” US State Department spokesperson Ned Price said at a briefing.

Pope Francis also appealed for an end to the violence on Wednesday.”I appeal also to the international community to act so that the aspirations of the people of Myanmar is not suppressed by violence. That the young people of that beloved land get the opportunity of hope in a future where hate and injustice be replaced by meeting and reconciliation,” he said during his weekly audience.