A young woman shot in the head last week during an anti-coup protest in the Myanmar capital died on Friday, a family member told CNN.

She is the first known casualty of pro-democracy protests that have been ongoing for two weeks, following the military’s seizure of power on February 1.
Mya Thweh Thweh Khine, who recently turned 20, had been in critical condition since February 9, when she was shot at a protest in Naypyidaw.
At the time, a source with direct information about the victim said she was taken to hospital with a gunshot wound in the head. Meanwhile, National League for Democracy Party (NLD) spokesperson Kyi Toe said in a Facebook post that a bullet had pierced the motorcycle helmet she was wearing.
Video of the incident circulated online showed a young woman suddenly falling to the ground while taking cover from a water cannon at a protest. 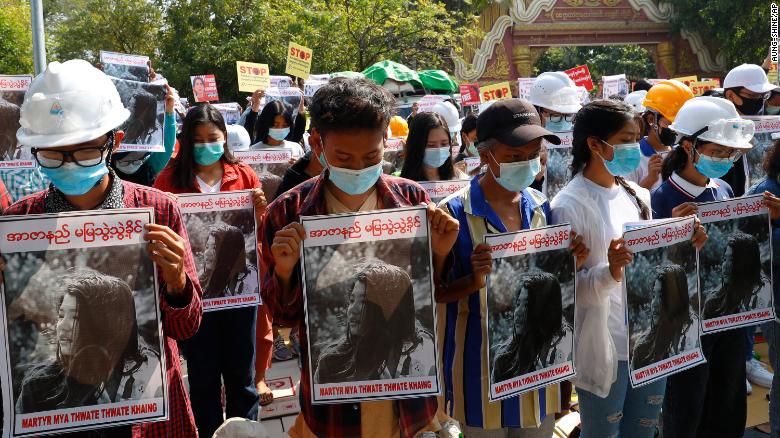 Mandalay University graduates bow their heads as they hold posters with images of Mya Thweh Thweh Khine on February 14, 2021.

Symbol of the protests

Rights group Amnesty International previously analyzed images and footage from that week and said they showed a police officer holding a locally made variant of an Uzi sub-machine gun. Amnesty said the images were taken from a location near the Thabyegone Roundabout, across the road from where a young woman was shot.
Amnesty said it has verified the coordinates of the image, which shows an officer holding a “Myanmar-made BA-94 or BA-93 Uzi clone.” CNN has not been able to independently verify the image.
In a news release, the head of Amnesty’s crisis evidence lab Sam Dubberley said: “The serious injuries sustained by this young woman were caused by the Myanmar police firing live ammunition directly towards peaceful protesters.”
In a February 10 Facebook post, Myanmar’s military wrote it only used anti-riot weapons at the protest near the Thabyegone Roundabout and was investigating reports two protesters had been injured.
Mya Thweh Thweh Khine’s death sparked calls for an investigation into the use of force by Myanmar’s security forces.
“The incidents leading up to her death and allegations of live ammunition used by Myanmar police should be investigated. Above all, there should be strong international condemnation and strong consequences against the Myanmar military,” Human Rights Watch’s Myanmar researcher Manny Maung wrote on Twitter.
Since the shooting, Mya Thweh Thweh Khine has become a symbol of the protests, which have intensified over the past two weeks. Illustrations of her image were seen on signs and banners as protesters called for the military to hand back power to civilian control and for the release of ousted leader Aung San Suu Kyi and other elected officials.
Myanmar is under a state of emergency for one year, after the commander-in-chief of the armed forces, Min Aung Hlaing, seized power over alleged voter fraud in the November 2020 elections. That poll gave civilian leader Suu Kyi’s NLD a landslide victory and a second term in power. 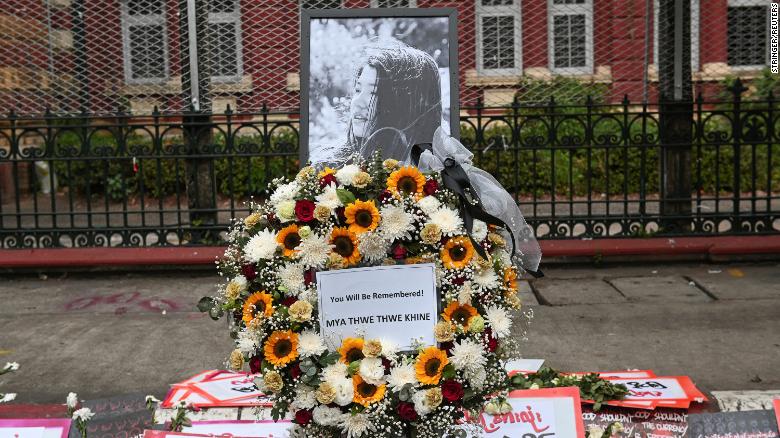 A memorial for Mya Thweh Thweh Khine is seen in Yangon on February 18, 2021.

Public anger at the coup has intensified in recent days, with hundreds of thousands of people taking to the streets in towns, cities and villages across the country.
Suu Kyi was placed under house arrest and charged with breaching import-export laws — charges described by Amnesty as “trumped up.” This week, a second charge was filed against her in relation to a national disaster law. President Win Myint has also been detained and faces charges.
On Thursday, the United Kingdom and Canada imposed sanctions on three generals from Myanmar’s junta, British Foreign Secretary Dominic Raab announced.
The targeted officials are Defense Minister Gen. Mya Tun Oo, Home Affairs Minister Lt. Gen. Soe Htut, and Deputy Home Affairs Minister Lt Gen. Than Hlaing. All were sanctioned for their responsibility in serious human rights violations by the military or the Myanmar police force, Raab said.
“The UK condemns the military coup and the arbitrary detention of Aung San Suu Kyi and other political figures,” Raab said. “We, alongside our international allies, will hold the Myanmar military to account for their violations of human rights and pursue justice for the Myanmar people.”
A total of 16 members of the Myanmar military had already been targeted by UK sanctions.
US President Joe Biden last week announced the United States will sanction Myanmar’s military leaders following the coup. Biden also called on the military junta to release detained protesters and civilian leaders, including Suu Kyi and Win Myint, and cease their crackdowns on demonstrators.
Source : CNN