Pakistan says it carried out air raids in Indian-administered Kashmir and shot down two Indian jets in its own airspace, capturing three pilots as tensions escalate a day after India bombed targets in Pakistan.

“Today, Pakistan Air Force undertook strikes across Line of Control from within Pakistani airspace,” the foreign ministry said in a statement on Wednesday.

The foreign ministry said it had hit a “non-military” target inside Indian-administered Kashmir, but that it had avoided human loss and collateral damage.

“If India is striking at so called terrorist backers without a shred of evidence, we also retain reciprocal rights to retaliate against elements that enjoy Indian patronage while carrying out acts of terror in Pakistan,” it said.

Major General Asif Ghafoor, spokesperson of the Pakistani army, said Indian jets had entered Pakistan in response and two fighter jets had been shot down, with three pilots captured.

One of the aircraft fell inside Indian-administered Kashmir, while the second came down in Pakistani territory, he added.

The development comes as Indian officials said at least three Pakistani combat jets entered the airspace over Indian-administered Kashmir on Wednesday but returned after being intercepted by Indian planes.

A spokesman for India’s defence ministry was not immediately available for comment. Police officials in Indian-administered Kashmir said that two pilots and a civilian had died after an Indian air force plane crashed in Kashmir, but did not confirm if the plane had been shot down by Pakistani forces.

At least four airports in the northern part of India, including the main airport in Indian-administered Kashmir, were shut down indefinitely on Wednesday amid warnings of a retaliatory attack by Pakistan.

Flights have also been suspended in northern Pakistani cities, including Lahore and Peshawar.

Both countries have ordered air strikes over the last two days, the first time in history that two nuclear armed powers have done so, while ground forces have exchanged fire in more than a dozen locations.

India on Tuesday said it had launched an air attack inside Pakistan and that its warplanes killed “a very large number” of fighters at a rebel training camp, raising the risk of conflict between the nuclear-armed neighbours.

Pakistan denied there had been casualties, but has warned that it will respond to Indian aggression.

Pakistan and India have fought three wars since independence from British colonial rule in 1947. 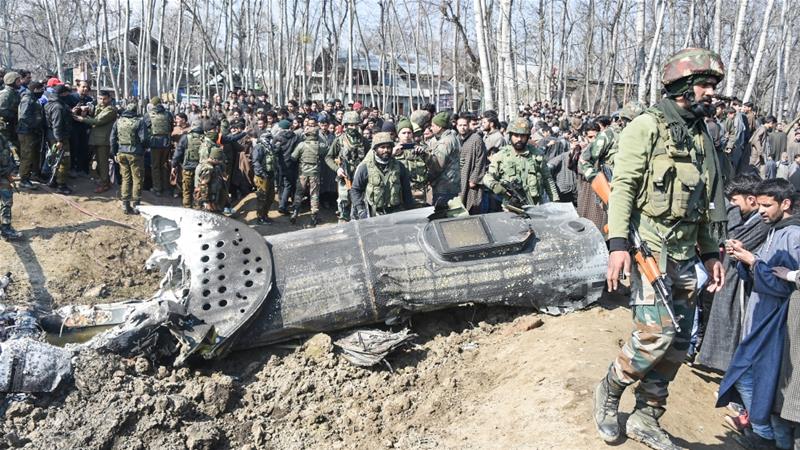