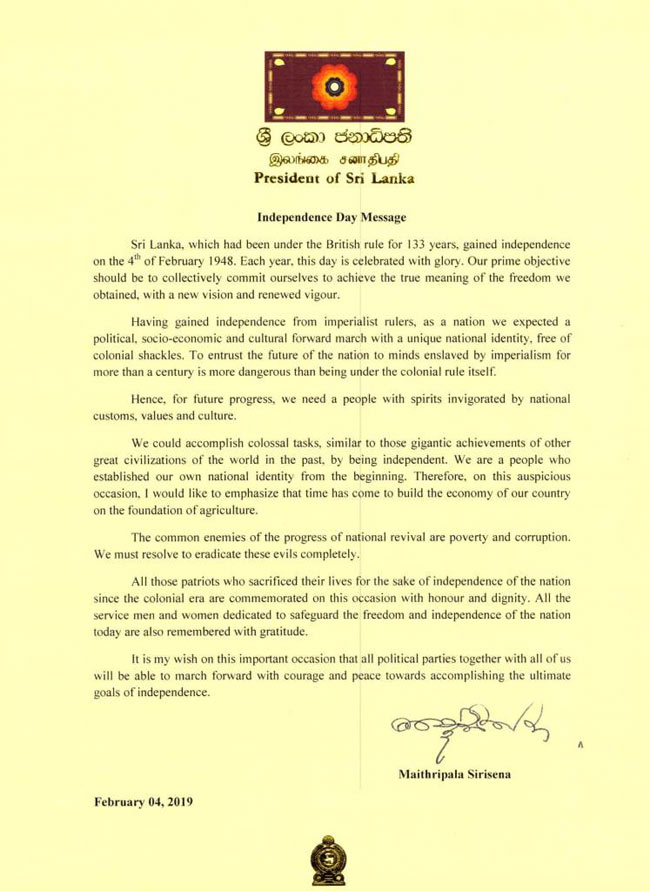 President in his National Day message says that that time has come to build the economy of our country on the foundation of agriculture.

He says that we should collectively commit to achieving the true meaning of freedom and that for future progress people with spirits invigorated by national customs, values, and culture are needed.

The complete message of the President is as follows:

Sri Lanka, which had been under the British rule for 133 years, gained independence on the 4th of February 1948. Each year, this day is celebrated with glory. Our prime objective should be to collectively commit ourselves to achieve the true meaning of the freedom we obtained, with a new vision and renewed vigor.

Having gained independence from imperialist rulers, as a nation we expected a political, socio-economic and cultural forward march with a unique national identity, free of colonial shackles. To entrust the future of the nation to minds enslaved by imperialism for more than a century is more dangerous than being under the colonial rule itself.

Hence, for future progress, we need people with spirits invigorated by national customs, values, and culture.

We could accomplish colossal tasks, similar to those gigantic achievements of other great civilizations of the world in the past, by being independent. We are a people who established our own national identity from the beginning. Therefore, on this auspicious occasion, I would like to emphasize that time has come to build the economy of our country on the foundation of agriculture.

The common enemies of the progress of national revival are poverty and corruption. We must resolve to eradicate these evils completely.

It is my wish on this important occasion that all political parties together with all of us will be able to march forward with courage and peace towards accomplishing the ultimate goals of independence.