“Yes this account is hacked by John Wick ([email protected]), We have not hacked Paytm Mall,” read one of the tweets posted on the account.

A series of tweets asked followers to donate to PM National Relief Fund through cryptocurrency. The same have since been taken down.

“I appeal to you all to donate generously to PM National Relief Fund for Covid-19, Now India begin with crypto currency, Kindly Donate eth to 0xae073DB1e5752faFF169B1ede7E8E94bF7f80Be6,” read another tweet.

Twitter said it was aware of the activity and has taken steps to secure the compromised account. “We are actively investigating the situation. At this time, we are not aware of additional accounts being impacted,” a Twitter spokeswoman said.

Earlier in July, several accounts of prominent personalities were hacked. Hackers had accessed Twitter’s internal systems to hijack some of the website’s top profiles including US presidential candidate Joe Biden, former US President Barack Obama and billionaire business tycoon Elon Musk, and used them to solicit digital currency. The corporate accounts for Uber and Apple were also compromised in the major breach.

Twitter accounts of Bill Gates, Barack Obama, Kanye West, Elon Musk were hacked to promote a bitcoin scam as all the accounts had posted the same tweet: “Feeling grateful doubling all payments sent to my BTC address! You send $1,000, I send back $2,000! Only doing this for the next 30 minutes.”

The Twitter accounts of Shane Watson and Waqar Younis were also hacked earlier. Last month, a 17-year-old Florida boy hacked celebrity accounts on Twitter Inc. A British man of age 19 and a 22-year-old man in Orlando, Florida were also charged under US federal law with aiding the attack. 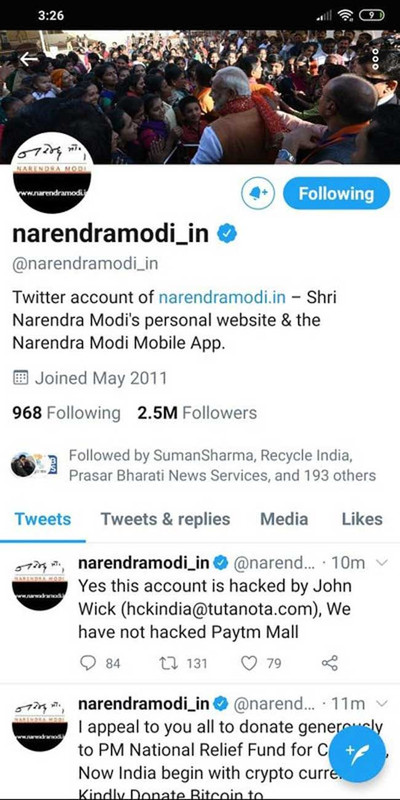