President Donald Trump visited the US-Mexico border Tuesday and tried to credit his new wall with stopping both undocumented immigration and the coronavirus.

In the blazing heat, Trump briefly stopped to inspect a new section of the concrete and rebar structure where the president and other officials took a moment to scrawl their signatures on the wall.

“It stopped COVID, it stopped everything,” Trump said.

Trump was looking to regain campaign momentum after his weekend rally in Tulsa, Oklahoma, which was supposed to be a sign of the nation’s reopening. Low turnout for the rally, however, sharpened the focus on Trump’s visit to Arizona, which doubles as both a 2020 battleground state and a surging coronavirus hot spot.

By visiting the border, Trump sought to change the subject to an issue he believes will help electrify his base in November.

“Our border has never been more secure,” Trump declared as he met with Arizona Republican Governor Doug Ducey and federal Border Patrol officials.

Later in the day, Trump addressed a group of young Republicans at a Phoenix megachurch. The “Students for Trump” event at the Dream City Church is part of a special project of Turning Point Action, a group chaired by Trump ally Charlie Kirk. 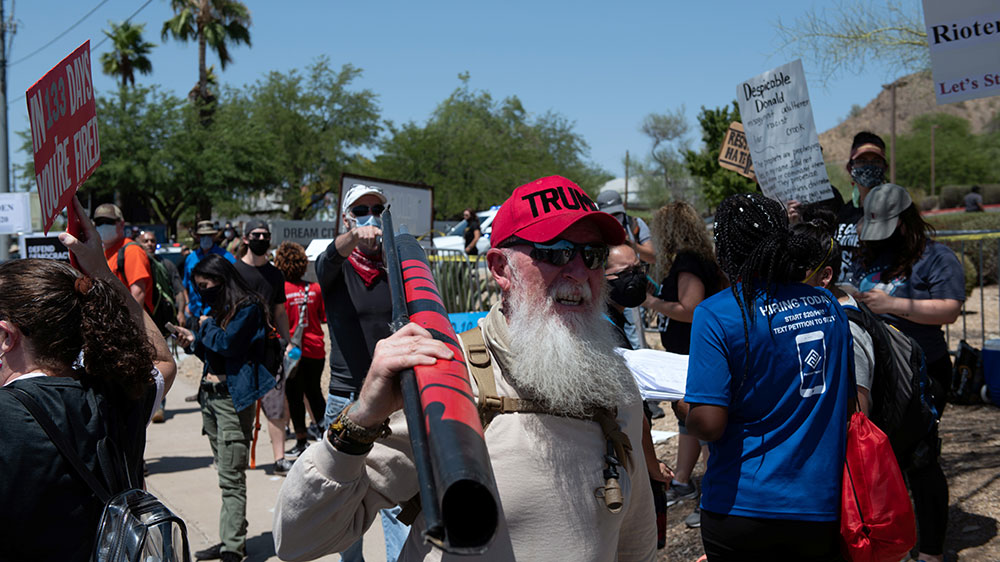 Campaign officials stressed that such rallies would remain a staple of the president’s re-election strategy but allowed that they may, in certain states, need to change slightly. Discussions were under way about having them in more modest venues or outdoors, perhaps in aeroplane hangars and amphitheatres, or in smaller cities away from likely protesters.

Trump’s visit to the Phoenix church comes on the same day that Vice President Mike Pence kicked off a faith-centred tour, highlighting the central position that religious conservatives – particularly white evangelicals, but also right-leaning Catholics – continue to occupy in the president’s base. Yet, even as Trump’s campaign overtly courts religious voters, there are signs of softening support among voting blocs the president cannot afford to lose.

Trump’s focus on construction of his long-promised border wall also is meant to shore up support with his most loyal supporters.

His administration has promised to build 450 miles (724 kilometres) by the end of the year, but that seems unlikely. The government has awarded more than $6.1bn in construction contracts since April 2019 for various projects along the border. It has also waived procurement rules that critics say make the process of awarding multimillion-dollar contracts secretive and opaque.

Throughout the trip, the COVID-19 pandemic is shadowing Trump. Since late May, Arizona has emerged as one of the nation’s most active hot spots for the spread of COVID-19, with disturbing trends in several benchmarks, including the percentage of tests that prove positive for the virus, which is the highest in the nation.

The state reported a new daily record of nearly 3,600 additional coronavirus cases Tuesday as Arizona continued to set records for the number of people hospitalised, in intensive care and on ventilators for COVID-19. Arizona’s total caseload in the pandemic has reached at least 58,179, with 42 more deaths reported Tuesday, raising the death toll to 1,384.