The Attorney General is set to request the Public Service Commission to conduct a disciplinary inquiry into the telephone conversation between the former Director General of the Bribery Commission and the Avant-Garde Chairman.

The Coordinating Officer of the Attorney General said the relevant request will be directed in writing to the Public Service Commission this Monday (23).

Avant-Garde Chairman Nissanka Yapa Senadhipathi, who is currently receiving medical treatment in Singapore, friday (20) disclosed a telephone conversation that he has had with the former Director General of the Bribery Commission, Solicitor General Dilrukshi Dias Wickremesinghe regarding the Avant-Garde case.

The female voice of the controversial telephone conversation was heard saying “I know how to break the law and make the law.” She expressed her regrets over filing the Avant-Garde case while blaming the country’s disorderly politics as the reason behind the case.

In this backdrop, the former Bribery Commission chief, Solicitor General Dilrukshi Dias, taking to Facebook, called on Avant-Garde chairman to release the unedited version of the conversation to the public, alleging that he has distorted it.

She also refused to make an explanation on the conversation as she is not entitled to do so as a government servant.

The Solicitor General also challenged the Avant-Garde chairman to which government minister that he called and for what reasons. 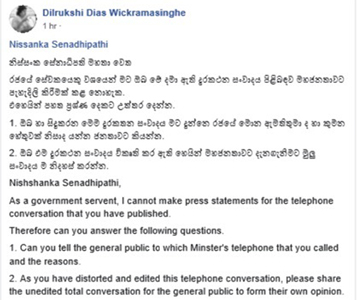