As per the new classifications, upper-middle income economies are defined as those with a GNI per capita between USD 3,996 and USD 12,375.

They base this assignment on Gross National Income (GNI) per capita (current US$) calculated using the Atlas method. The classification is updated each year on July 1st.

The classification of countries is determined by two factors:

A country’s GNI per capita, which can change with economic growth, inflation, exchange rates, and population. Revisions to national accounts methods and data can also influence GNI per capita.

Classification threshold: The thresholds are adjusted for inflation annually using the SDR deflator.

Until last year (Fiscal Year 2019), the income classifications had an analytical purpose and did not influence the World Bank’s lending terms.

However, since the last fiscal year, the high-income threshold is also a determining factor for lending rates.

Surcharges are applied for lending rates of countries which have been categorized as high income for two consecutive years.

New thresholds are determined at the start of the World Bank’s fiscal year in July and remain fixed for 12 months regardless of subsequent revisions to estimates. 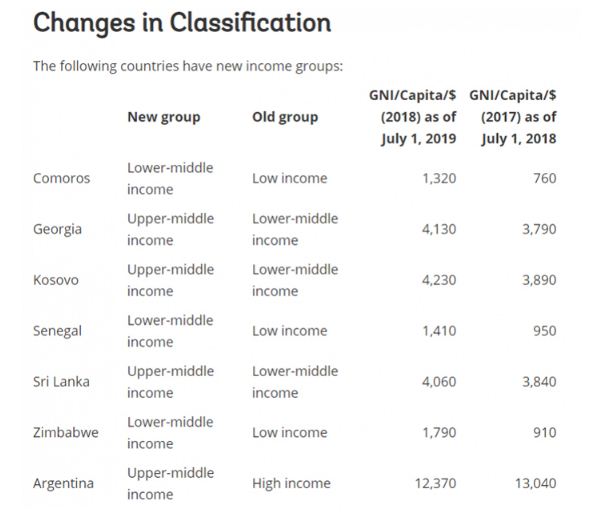