Minister Mangala Samaraweera, in a letter addressed to His Holiness Pope Francis, has criticized the Archbishop of Colombo, His Eminence Malcolm Cardinal Ranjith for disrupting the ethnic harmony in Sri Lanka during the terrorist crisis.

In his letter, the minister accuses the Cardinal of ‘supporting’ Ven. Athuraliye Rathana Thero, who carried out a protest fast in front of Sri Dalada Maligawa in Kandy to force the resignation of Muslim ministers from the Sri Lankan government.

Minister Samaraweera says “There are no legal cases against these Muslim ministers and the only reason to oppose them is that they are Muslims.”

The letter then accuses the Cardinal of complaining about the government’s decision to advise the security forces against checking Muslim houses continuously. The minister claims that the Cardinal had asked to check the houses of Muslims “with no regard for their privacy.”

The minister goes on to accuse the Cardinal of stating that the “responsibility of the terrorist attack must be taken by the Sri Lankan government” and for accusing “the Prime Minister who was appointed by the public”.

The Cardinal has alleged that the suicide bomb attack was a result of a conspiracy by the United States of America without any evidence, Minister Samaraweera further claims.

The minister also accuses the Cardinal of proclaiming Sri Lanka is a Sinhala Buddhist country “without any evidence or fact”. He alleges that it “challenges the belief of the Catholic Church that the whole world belongs to God”. 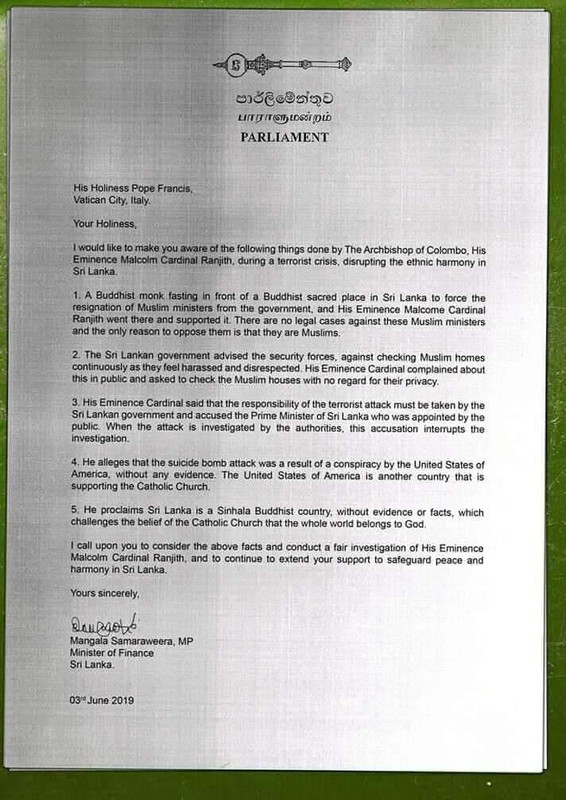