Minister Mangala Samaraweera has tweeted that the letter, addressed His Holiness Pope Francis claiming to be written by him, is a fake letter being circulated in social media.

The letter, strongly criticizing the actions of Archbishop of Colombo His Eminence Malcolm Cardinal Ranjith, had surfaced on social media with the Parliament letterhead and with the signature and name of the Finance Minister at the bottom.

However, posting a message on his official Twitter account, Minister Mangala Samaraweera today rejected the letter as “fake”.

A letter claimed to be written by the Finance Minister, has accused the Archbishop of Colombo Cardinal Ranjith for disrupting the ethnic harmony in Sri Lanka during the terrorist crisis.

It also called on Pope Francis to conduct a fair investigation on the Cardinal.

The letter read that the minister accuses the Cardinal of proclaiming Sri Lanka is a Sinhala Buddhist country without any evidence or fact and this challenges the belief of the Catholic Church that the whole world belongs to God.

The letter also accused the Cardinal of ‘supporting’ Ven. Athuraliye Rathana Thero, who carried out a protest fast in front of Sri Dalada Maligawa in Kandy to force the resignation of Muslim ministers from the Sri Lankan government. 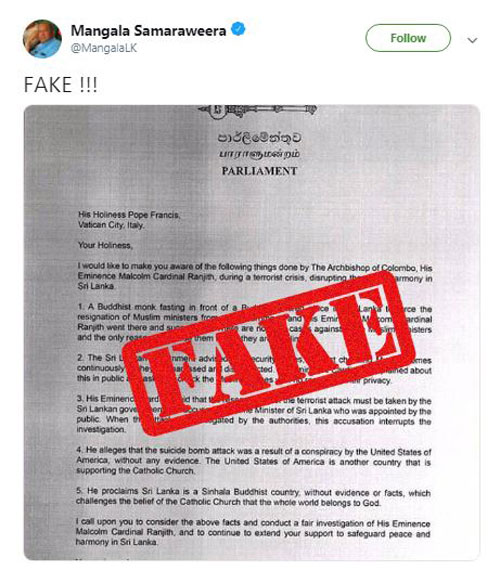