President Maithripala Sirisena, in his message for the International Workers’ Day, stated that Sri Lanka works in accordance with the agreements and criterion of the International Labour Organization and other international institutions regarding the rights of the working class.

Complete May Day message of the President:

“It is the day on which the legendary voice of a group of gallant workers sacrificed their lives while demanding to limit the daily working period to eight hours.
Today symbolizes the fair expectations of the working class strengthened due to that historical occurrence. Hence, I express my gratitude to the working class of the world, who did not stop their struggle, which commenced 133 years ago and turned their fight for the rights of the worker an unceasing a struggle.

The international awareness among the working class regarding the need to raise voice to win their rights was first felt in Sri Lanka by the offset letter compositors of the printing industry. Then, workers of fields such as railway, bullock cart services, trams, and ports also started to raise their collective voices for their rights. As a result of the slogans raised at May Day demonstrations, the working class won the right for pension, provident fund and several other rights for the workers.

Sri Lanka is a country that works in accordance with the agreements and criteria of the International Labour Organization and other international institutions and cooperating with them regarding the rights of the working class of the country. We have fully realized that no sector could prosper and productive without the help of the working people and we are also aware of the power of the working people in our forward march towards a prosperous future.

Many political parties have decided not to hold May Day celebrations due to the unexpected situation that arose in the country. Nevertheless, we should commit ourselves on this May Day to strengthen mutual reconciliation as one cluster of human beings who enjoys fair human rights and to collectively create a living environment free of hindrances.

I convey my greetings and express my gratitude to the working class of the nation with the confidence that your unceasing struggle would open further paths towards development and prosperity in the future.” 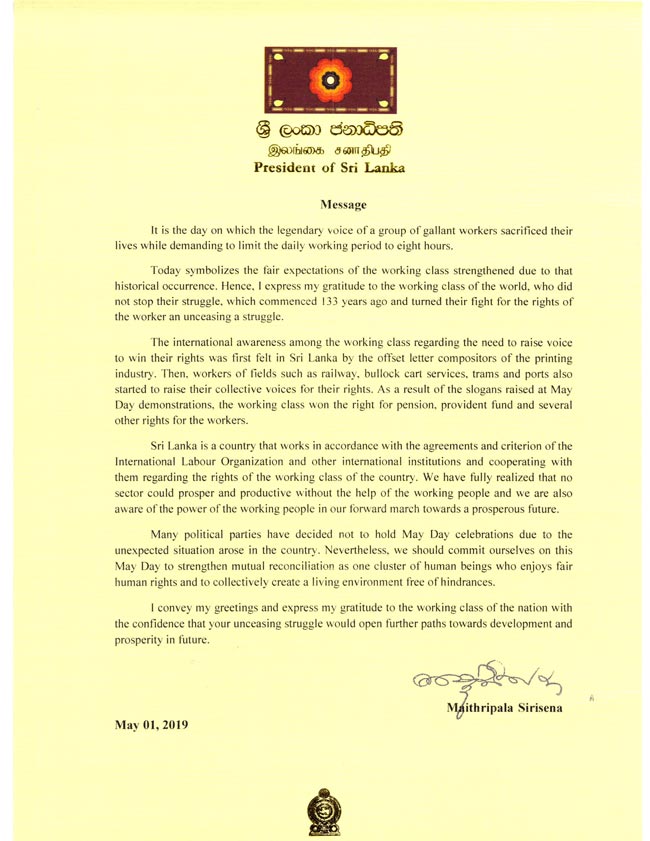