The death toll from a horrific blaze that ripped through a Bangladesh skyscraper rose on Friday to 25, including some who leapt to their deaths, as firefighters combed through the charred shell of the building.

A day after flames tore through the 22-storey FR Tower in Dhaka, trapping hundreds of office workers, police said they intended to talk to the owner of the building as part of their enquiry.

Some of those stuck inside made it to safety by sliding down cables on the side of the building, but as shocked onlookers watched, others took their chances and jumped in a bid to escape the smoke and heat.

At least six people including a Sri Lankan national died in this way, officials said.

The fire department intially put the death toll at 19 but police said Friday that six more had died in the fire.

“The death toll is 25. We have handed over 24 bodies to their relatives,” deputy commissioner of Dhaka Metropolitan Police Mostak Ahmed told. The other victim’s remains are being held until relatives are located.

Ahmed said police also wanted to speak to the owner of the building after authorities alleged the tower lacked adequate safety measures.

There was no immediate indication if others are missing, but more than 70 people were treated in hospital in the wake of the blaze.

The fire erupted on Thursday afternoon in the upmarket Banani commercial district.

Hundreds of onlookers gathered to watch as trapped workers screamed for help from smoke-logged floors.

Firefighters backed by military specialists — some in helicopters – tackled the blaze, lowering ropes to help people escape, while rescuers on long ladders smashed through windows.

Bangladesh authorities have ordered a probe into the incident to examine claims that the skyscraper lacked fire equipment, its fire exits were inadequate and it had been illegally extended.

The latest inferno erupted barely a month after at least 70 people were killed in Dhaka apartment buildings where chemicals that were being stored illegally exploded – unleashing a blaze that took more than 12 hours to control. According to a 2012 study by Bangladesh University of Engineering and Technology, most high-rise buildings in the capital have inadequate fire safety measures.

“We found only two buildings fully compliant,” BUET professor Mehedi Ahmed Ansari said of the survey on 112 buildings, adding that some they looked at were little more than “death traps”.

Fire department director Shakil Newaj said they had warned the FR Tower management to improve fire safety standards, but they did not pay heed.

“Fire safety measures in the building were very weak. There were no sprinklers. Fire exits existed only in name,” Newaj told.

A June 2010 fire in the nearby neighbourhood of Nimtoli, one of the most densely populated districts of the capital, killed 123 people.

In November 2012, a fire swept through a nine-story garment factory near Dhaka killing 111 workers. An investigation found it was caused by sabotage and that managers at the plant had prevented victims from escaping. 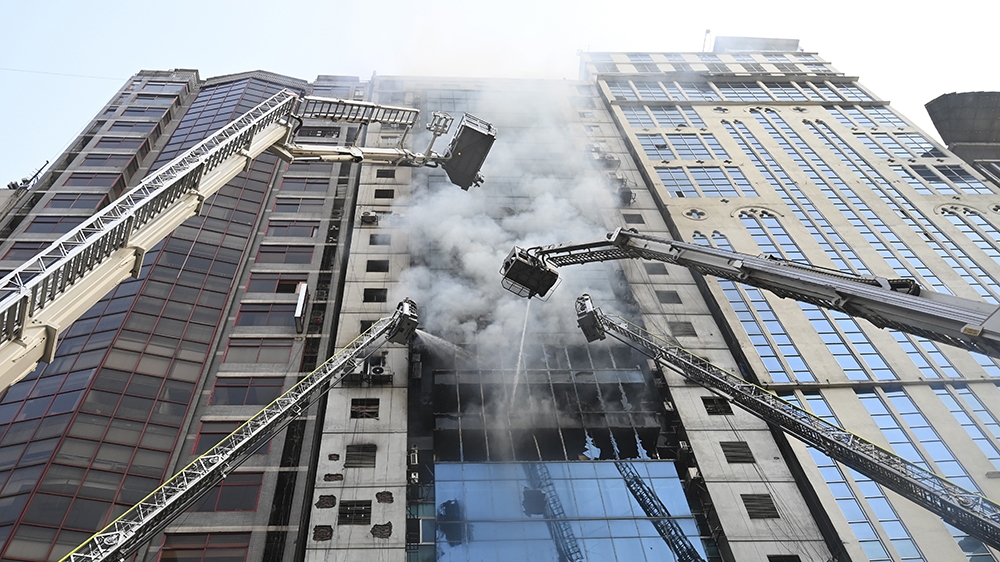